Wisconsin votes switched from Biden (losing) to Trump, who was winning when the swap took place.  Its almost depressing, witnessing the corruption in America.  Currently there is a vapor-thin Biden lead of ~1, 500 votes, and that will disappear this week as the fraudulent votes are subtracted from Bidens’ totals.

Then there is the matter of the fake paper ballots for Biden.  Those remain to be compiled and deducted, but there were thousands of them, maybe 100K+, so Wisconsin will be Trumps, maybe by the end of this week.

I want to rejoice, but the fact that the left is so corrupt is tremendously depressing to me.  Sure, it is great that Trump has four more years, but we still have this cancer called the DNC operating in the USA.  The DNC has to be eliminated, just like the mafia had to be shut down back around 90 years ago.

Yesterday was a busy day on the server.  Huge volume of traffic after I posted the piece I wrote about Dianne Feinstein owning Avid Technology,  the software company that designed and owns the vote-swapping software.  The DNC no doubt used that software to promote Biden and down-vote Bernie in the primaries.  And certainly they did the same against Tulsi Gabbard.

I also got a notice yesterday from Google that an old Gmail address/account that I have not used in many years was hacked, and when I told my family about it last night, my son told me that he had an email account that was also hacked yesterday.

And who cares?  Internet technology is ho hum.  Hack away.  The only thing that matters is your relationship with Yahuah.  Everything else will turn to dust, will vaporize in an instant.  Only your relationship with Yahuah matters.  All this political stuff?  It matters to me personally because at least in Trump I see a man who is willing to risk all in order to do the right thing for America.  I trust the man.  He is imperfect and coarse, but I fight for him because he fights for me.

The rest of them –  Obama, Biden, Clinton, Bush – all are worse than bad.  Their wickedness is without limits. 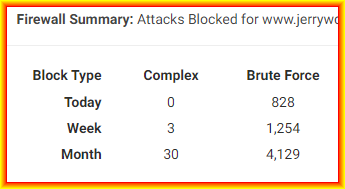 Before I started writing about Yahuah’s love for us in 2017, I wrote exclusively about corruption in government.  My site was destroyed right after I published a razor sharp piece against James Comey, the communist FBI director (yes, an actual avowed communist), in 2016.  If I remember correctly, the take-down was a couple of months after Trump was elected.

Whoever took my site down took every site I had down and destroyed the backups, too.  My hosting company  was so afraid that they even charged ME with violating the Users Agreement (EULA) and closed my account.  They never did tell me what part of the Users Agreement I violated, and of course, I didn’t violate the EULA.  I had done business with them for maybe 15 years at that time.

So, we are stirring things up here, which is good.  I learned from my previous experience to take certain protective measures, which work quite well.   Maybe the Republicans can learn to do the same with their data.

By the way, and in closing – take seriously the prospect that you might have to defend yourself with deadly force in the coming months.  Trump will rule for another four years and the jackals on the left plan to raise hell over it.  Already they sense that their “Biden Won” ruse is failing.  They are trying to push as far into the White House as they can, as fast as they can, but time is slipping away and the fraud is universally known now.  I’m still flying my Trump flags on my truck, but they will come down after this is settled in Trumps favor.  Yard signs, too.  Same thing.  Bumper stickers – same thing.

Hi Jerry,
I am following your updates and here in the UK we have one outlet that tells the truth it is https://www.ukcolumn.org/ the one that Patrick Henningson of 21 century news appears on.
I have changed my web site address as it was incorrect.
Thanks for all your hard work, keep it up God’s on our side!

Thanks, Gill. How are you? When you changed your web site address, do I need to take any action on that?