Yesterday I was alarmed to discover that Vice-President Pence had been recalled from a campaign event and ordered to return to Washington immediately for an “emergency”.  He was stopped as his jet was about to take off (Air Force 2) and returned to the White House.

This is a major “coincidence”.

Looking into it, I found it reported in some channels that an American submarine discovered a small Russian “secret/experimental” operating in US waters off the coast of Alaska, and that a Russian war-fighting submarine, which accompanied the small Russian spy-tech submarine, fired upon the US submarine (unnamed so far).

The US submarine sank to the bottom, and the Russian sub returned, damaged, to Russia with some 14 dead.

The small Russian spy sub is, to the best of my knowledge, the Losharik, a special-purpose spy submarine, capable of exceptional underwater stealth.  It has to be towed to its area of operations for some reason, and then released to maneuver on its own.  I suspect it has a unique and silent propulsion system and the Russians tow it in order to reduce the liklihood that its propulsion system will be “heard” by US underwater sensors and “learned” for tracking and identification purposes.

Pure speculation based on some scant information from sources who have sources.

But Pence and Putin both had emergency meetings on the same day that this event took place.

I suspect that the Russian Losharik  was either placing navigation beacons for future Russian war actions VS the US, or tapping into US undersea cables with the intent of injecting false information into military communication channels.  That would be something that the Russians would want to keep ultra secret, and would risk war by sinking a US sub to prevent the US from finding out that our undersea coms had been compromised to the point that the Russians could take over and present any kind of false data they wanted to.  That would be huge because if the Russians had that capability, they could create unimaginable confusion in the US defense arena, especiallu in the event of a surprise attach by the Russians.

Surprise attack is one of the few good options the Russians have in regards to war between the USA and Russia.

Additionally, war with Iran escalated yesterday with the arrival of the USS Boxer, a US Navy Marine fast attack ship that is used to send in US Marines to specific locations in an enemy territory to accomplish specific missions.  Missions like blowing up Irans nuclear weapons production facilities.

Libya declared war on Turkey this week, too.

The Russian Sub event is significant and might impact the world.  I am sure that neither Trump nor Putin wants war, but there will be a price to pay, and it will likely be IRAN who gets hammered with the Russians staying home.

TRUMP: “Vlad, you sank our submarine in US waters.  We can totally annihilate Russia, but we are, instead, going to eliminate IRAN and you are going to sit down and STFU.  If you do not, we will go public with your illegal, murderous acts and the US public will FOREVER hate Russians for it.  We will memorialize the dead sailors and they will be on televisions world-wide for eternity.  Americans will demand Russian blood and we will humiliate you for the entire world to see.  And the world will cheer for America, Vlad.”

VLAD: “You can never humiliate Russia.  We are a super-power and we can CRUSH America.  But we never liked the Iranians, anyway. Please give my regards to your beautiful wife.”

Below are some links that you might find useful if you want more information.

Debka Files
Note: Debka speaks of a “Balkan 2000” torpedo, and I cannot find any information on this type of torpedo.  Maybe there is no such thing.  Maybe its a false flag.

Hal Turner
Hal generally has good information, but the best score I give him is a B-.  He is a believer, though, and had a very special dream that I republished here.

Getting Ready To Scorch Iran

The USS Boxer, a US Marine Expeditionary Force invasion ship, posted up beside Iran this week.  Already tense relations between Iran and the U.S. worsened last week when a U.S. surveillance drone was shot down by the Iran’s Islamic Revolutionary Guard Corps. The Iranians said the unmanned RQ-4 Global Hawk aircraft had entered its airspace, but the U.S. has insisted the attack occurred when the drone was flying over international waters.

Iran is blamed for placing mines on oil tankers 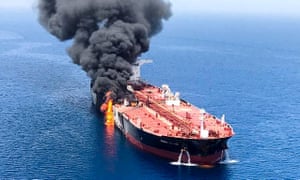 The U.S. Air Force has deployed a contingent of F-22 Raptor stealth fighters to Al Udeid Air Base in Qatar for the first time ever. This comes just over a week after the Iranians shot down a U.S. Navy RQ-4A Broad Area Maritime Surveillance-Demonstrator drone, or BAMS-D, flying over the Gulf of Oman. That incident had sent already elevated tensions between the United States and Iran skyrocketing, almost leading to U.S. military strikes on Iranian targets. The U.S. government has since hit the regime in Tehran with new sanctions and is now reportedly looking to put together a new regional military coalition to put additional pressure on Iran.

I will do my best to get you the most accurate information, and certainly I will monitor this entire scenario.  Washington will try to muddy the water by issuing lots of conflicting information to confuse people, so be mindful of that.  The rapidly escalating US military capability around Iran is a key factor.  War with Iran is almost a certainty, which brings to mind the prophet Zechariah.

See how quickly this can escalate into world war?

Thank you for the update. It is appreciated.
Stay strong
Kate