That firmament above us, with the waters in between earth and heaven.  The singing stars spoken of in the scriptures, singing at the glory of creation.

Let me show you some stars that most of you have never seen.  Ask yourself if NASA told you the truth, the whole truth and nothing but the truth?  Remember Werner Von Braun, the NAZI physicist who built the American space program?

He was an ardent believer in Yahuah, and was saved by faith in Yahusha.  He was also the Number 1 top best, brightest, most respected space scientist America has ever had.  He knew what was up there, and he told us on his headstone.

On his headstone, there is his name, his date of birth and of physical death, and one reference to the Holy Bible: Psalm 19:1- 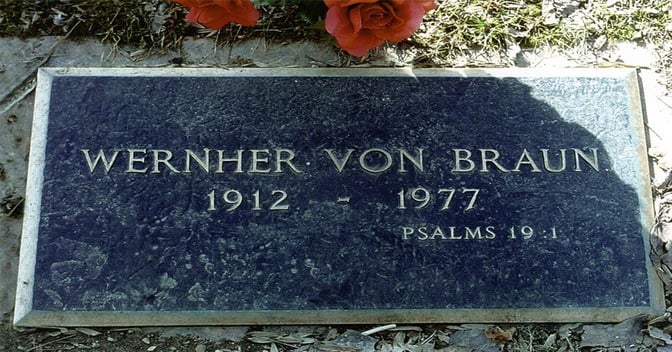 H7549
רקיע
râqı̂ya‛
BDB Definition:
1) extended surface (solid), expanse, firmament
1a) expanse (flat as base, support)
1b) firmament (of vault of heaven supporting waters above)
1b1) considered by Hebrews as solid and supporting ‘waters’ above
Part of Speech: noun masculine

I showed you all of that so that you might receive this:

Haven’t you ever wondered why NASA has never put a big earth-facing telescope “up there” so that we could watch the earth spinning like a ball on TV 24×7?  They could make the telescope zoom in on forest fires at night or planes taking off or ships at sea or hurricanes live or tsunamis as they raced across the ocean.

But they don’t do that, even though it would be the biggest public relations move in history.  Now you tell me, why would NASA never put a telescope “in space” pointed back at the earth for us to see the real thing?

Shabbat Shalom.  Abide with one another in peace.  We are called to peace.

Hey Jerry. I have been teaching that the stars are angels for many years. The stars are angels and are falling like the untimely figs when a wind blows. All of the so called asteroids are stars – angels falling from their Oikiterion, heavenly place. Here is a amateur video showing what the stars are. They are alive and are not at all what is presented to us by NASA- which means to deceive. here is the link – https://www.youtube.com/watch?v=-F6o83e1JtI
The earth is Yehovah’s footstool and he sits above the firmament, like a magnifying glass, watching his creation, which must make him sick to his stomach to watch.
Yah bless bro.

Thanks, Mike. I’ll watch it in a few minutes.

Andreas Uhrig is inviting you to a scheduled Zoom meeting.

Hey buddy, I am usually at my computer for conversation in the evenings after 10 pm central US time. That is the best time to ping me. I generally stay up late.