As more and more ignorant, uninformed people submit to the false threat of Covid-19 and allow themselves to be injected with the experimental gene therapy, they will begin to resent the rest of us who know better.  If the injected start dropping like flies, they will believe it when the globalist eugenicists lie and claim that the fault is not the so-called “vaccine”, but rather is the fault of the uninjected.  You and me.  Our families and friends.  The healthy will become the threat.

Solution: Ban the healthy from life.  Ban the uninjected from society.  Ban us from work, from school, from food.  Can you imagine the government requiring a permit, which will simply be a tax, to attend church?

I can.  I expect it.  In America, we can expect to be persecuted to no end for daring to say no to the government’s fascist-supported lies.  This is the big push, the full frontal assault on human life.  On your life.  On the lives of your children.  This is part of the reason that the US Government now supports injecting infants with the proven deadly “Covid-19 vaccine”.

There is no place for us in New Normal society. The New Normals know this and so do we. To them, we are a suspicious, alien tribe of people. We do not share their ideological beliefs. We do not perform their loyalty rituals, or we do so only grudgingly, because they force us to do so.

They do not trust us. We are strangers among them. They suspect we feel superior to them. They believe we are conspiring against them, that we want to deceive them, confuse them, cheat them, pervert their culture, abuse their children, contaminate their precious bodily fluids, and perpetrate God knows what other horrors.

In the words of someone (I can’t quite recall who), “getting rid of the Unvaccinated is not a question of ideology. It is a question of cleanliness,” or something like that. (I’ll have to hunt down and fact-check that quote. I might have taken it out of context.)

In Israel, Estonia, Denmark, Germany, the USA, and other New Normal countries, they have already begun the segregation process.

In the UK, it’s just a matter of time. The WEF, WHO, EU, and other transnational entities are helping to streamline the new segregation system, which, according to the WEF,

will need to be harmonized by a normative body, such as the WHO, to ensure that is ethical.”

Here in Germany, the government is considering banning us from working outside our homes. We are already banned from flying on commercial airlines. (We can still use the trains, if we dress up like New Normals.)

In the village of Potsdam, just down the road from Wannsee (which name you might recall from your 20th-Century history lessons), we are banned from entering shops and restaurants. (I’m not sure whether we can still use the sidewalks, or whether we have to walk in the gutters.)

In Saxony, we are forbidden from attending schools. At the Berliner Ensemble (the theater founded by Bertolt Brecht and Helene Weigel, lifelong opponents of totalitarianism and fascism), we are banned from attending New Normal performances.

In New York, the new “Excelsior Pass” will allow New Normals to attend cultural and sports events (and patronize bars and restaurants, eventually) secure in the knowledge that the Unvaccinated have been prevented from entering or segregated in an “Unvaccinated Only” section.

The pass system, designed by IBM, which, if history is any guide, is pretty good at designing such systems (OK, technically, it was Deutsche Hollerith Maschinen Gesellschaft, IBM’s Nazi-Germany subsidiary), was launched this past weekend to considerable fanfare.

And this is only the very beginning.

Israel’s “Green Pass” is the model for the future, which makes sense, in a sick, fascistic kind of way. When you’re already an apartheid state, what’s a little more apartheid? Here’s a peek at what that looks like… 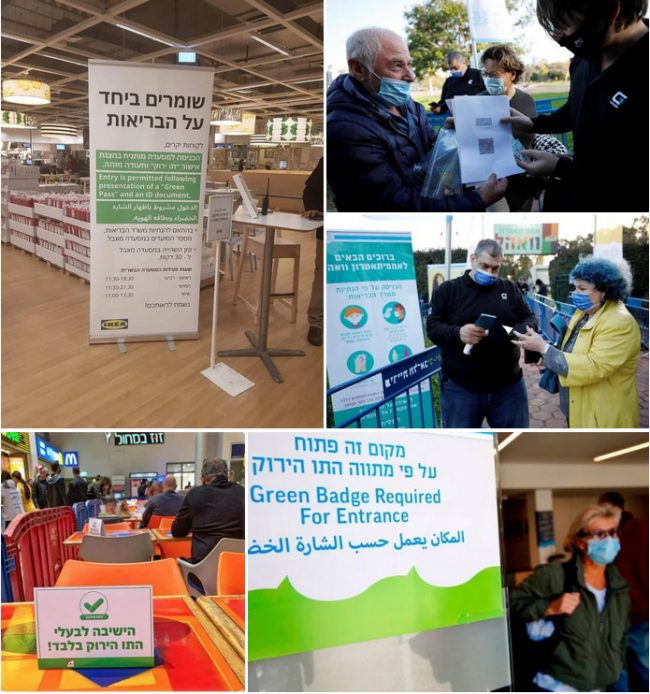 OK, I know what the New Normals are thinking. They’re thinking I’m “misleading” people again. That I’m exaggerating. That this isn’t really segregation, and certainly nothing like “medical apartheid.”

After all (as the New Normals will sternly remind me), no one is forcing us to get “vaccinated.” If we choose not to, or can’t for medical reasons, all we have to do is submit to a “test” — you know, the one where they ram that 9-inch swab up into your sinus cavities — within 24 hours before we want to go out to dinner, or attend the theater or a sports event, or visit a museum, or attend a university, or take our children to school or a playground, and our test results will serve as our “vaccine passports!”

We just present them to the appropriate Covid Compliance Officer, and (assuming the results are negative, of course) we will be allowed to take part in New Normal society just as if we’d been “vaccinated.”

Either way, “vaccine” or “test,” the New Normal officials will be satisfied, because the tests and passes are really just stage props. The point is the display of mindless obedience.

Even if you take the New Normals at their word, if you are under 65 and in relatively good health, getting “vaccinated” is more or less pointless, except as a public display of compliance and belief in the official Covid-19 narrative (the foundation stone of the New Normal ideology).

Even the high priests of their “Science” confess that it doesn’t prevent you spreading the “plague.” And the PCR tests are virtually meaningless, as even the WHO finally admitted. (You can positive-PCR-test a pawpaw fruit…but you might want to be careful who you tell if you do that.)

In contrast to the “vaccine” and the “test” themselves, the forced choice between them is not at all meaningless. It is no accident that both alternatives involve the violation of our bodies, literally the penetration of our bodies. It doesn’t really matter what is in the “vaccines” or what “results” the “tests” produce. The ritual is a demonstration of power, the power of the New Normals (i.e., global capitalism’s new face) to control our bodies, to dominate them, to violate them, psychologically and physically.

Now, don’t get all excited, my “conspiracy theorist” friends. I haven’t gone full QAnon just yet. Bill Gates and Klaus Schwab are not sitting around together, sipping adrenochrome on George Soros’ yacht, dreaming up ways to rape people’s noses. This stuff is built into the structure of the system. It is a standard feature of totalitarian societies, cults, churches, self-help groups, and…well, human society, generally.

Being forced to repeat a physical action which only makes sense within a specific ideology reifies that ideology within us. There is nothing inherently diabolical about this. It is a basic socialization technology. It is how we socialize our children. It is why we conduct weddings, baptisms, and bar mitzvahs. It is how we turn young men and women into soldiers. It is how actors learn their blocking and their lines. It is why the Nazis held all those rallies. It is why our “democracies” hold elections.

It is also basic ceremonial magic…but that’s a topic for a different column.

The issue, at the moment, is the Unvaccinated Question, and the public rituals that are being performed to make the New Normal ideology “reality,” and what to do about those of us who refuse to participate in those rituals, who refuse to forswear “old normal” reality and convert to New Normalism so that we can function in society without being segregated, criminalized, or “diagnosed” as “sociopathic” or otherwise psychiatrically disordered.

For us “conspiracy-theorizing reality deniers,” there is no getting around this dilemma. This isn’t Europe in the 1930s. There isn’t anywhere to emigrate to … OK, there is, temporarily, in some of the US states that have been staging rebellions, and other such “old normal” oases, but how long do you think that will last?

They’re already rolling out the “mutant variants,” and God only knows what will happen when the long-term effects of the “vaccines” kick in.

No, for most of us denizens of the global capitalist empire, it looks like the New Normal is here to stay. So, unless we are prepared to become New Normals, we are going to have to stand and fight. It is going to get rather ugly, and personal, but there isn’t any way to avoid that.

Given that many New Normals are our friends and colleagues, or even members of our families, it is tempting to believe that they will “come to their senses,” that “this is all just a hysterical overreaction,” and that “everything will go back to normal soon.”

This would be a monumental error on our parts…very possibly a fatal error.

Totalitarian movements, when they reach this stage, do not simply stop on their own. They continue to advance toward their full expressions, ultimately transforming entire societies into monstrous mirror-images of themselves, unless they are opposed by serious resistance. There is a window at the beginning when such resistance has a chance. That window is still open, but it is closing, fast.

I can’t tell you how best to resist, but I can tell you it starts with seeing things clearly, and calling things, and people, exactly what they are.

Let’s not make the same mistake that other minorities have made throughout history when confronted with a new totalitarian ideology. See the New Normals for what they are, maybe not deep down in their hearts, but what they have collectively become a part of, because it is the movement that is in control now, not the rational individuals they used to be.

Above all, recognize where this is headed, where totalitarian movements are always headed. (See. e.g., Milton Mayer’s They Thought They Were Free: The Germans 1933-45.)

No, the Unvaccinated are not the Jews and the New Normals are not flying big Swastika flags, but totalitarianism is totalitarianism, regardless of which Goebbelsian Big Lies, and ideology, and official enemies it is selling. The historical context and costumes change, but its ruthless trajectory remains the same.

Today, the New Normals are presenting us with a “choice,” (a) conform to their New Normal ideology or (b) social segregation. What do you imagine they have planned for us tomorrow?