There are very few things worth dying for in this world, but of the few that are worth dying for, number one on the list is children.This is going to be difficult to write.  I still weep over the slaughter of those children and over the fact that the “law enforcement” personnel did not do everything possible to save them.

I have never seen such a display of shameless cowardice in my entire life.  There is no way that I can possibly convey my contempt for the way “law enforcement”

ran from risk
1
Do you think the cops ran from a fight?x
and let those little innocent beautiful children be murdered one by one.

What was it like, “law enforcement” officer, standing there listening to children soaking up the bullets that you chose to run from?  How’d you sleep that night?  You will never outrun your shame.  You will wear it on your face in the grave.

I consider my question from my last podcast – What did Mary think as she watched her perfect, loving, gentle and devoted son get a spear shoved into His heart by the law enforcement on Golgotha.  Did she “forgive them for they know not what they do”?.

It is too much, and I fail.  I cannot yet love these “law enforcement” officers, these cowards who chose their own lives over the lives of a multitude of innocent, gentle, loving, happy, smiling, truthful and believing children.  Any one child in that slaughter is worth more than the entire contingent of “law enforcement” personnel who stood idly by, cuffing grieving parents as their children were systematically murdered in cold blood.

A Uvalde mother was PLACED IN HANDCUFFS by Federal Marshalls on scene for attempting to enter the school to get her child. Another man was tased for trying to get his kid off a bus. All while Salvador Ramos was alive inside killing kids https://t.co/LqqhuIMGlP pic.twitter.com/CNIUZ2GYhk

And the “law enforcement” leaders are equally guilty.  They defend your cowardice because they too are cowards.

The law enforcement response to the horrific school shooting at an Uvalde elementary school has been facing severe criticism after it was revealed that the shooter was alive inside the building for an hour without being taken out by police.

During this time, one brave mother drove 40 minutes from work, was handcuffed for trying to enter, talked police into freeing her, breached the perimeter, and went in and got her children out of the building.

Police officers also reportedly entered the building and rescued their own children during this time.

When questioned about the response by CNN’s Wolf Blitzer, Texas Department of Public Safety Lt. Chris Olivarez said that police were reluctant to engage the killer “because they could have been shot.”

“They could have been killed“, he says, so the decision was made to let the killer kill the children instead of sending in the armed and armored police to enforce the law.  Gutless, yellow cowards.  Lt. Chris Olivarez is a Texas State Trooper, who at this point are as disrespected and contemptable as the local cowards who also did not take immediate action to free those kids.

The gunman who massacred 19 children and two teachers at Robb Elementary in Uvalde, Texas lingered outside for 12 minutes firing shots at people in a funeral home across the street, before scaling a fence onto school grounds where he fired more shots.

Uvalde is a SMALL town.  A known mental case is shooting a rifle near a school for 12 minutes?  And no “law enforcement” comes to enforce the law? He then entered the school and barricaded himself in a classroom before opening fire, according to the Wall Street Journal.

Victor Escalon, a regional director for the Texas Department of Public Safety, said he couldn’t say why no one stopped the deceased gunman, 18 year-old Salvador Ramos, from entering the school during that time Tuesday. Most of the shots Ramos fired came during the first several minutes when he entered the school, Mr. Escalon said.

“Ms. Gomez, a farm supervisor, said that she was one of numerous parents who began encouraging — first politely, and then with more urgency — police and other law enforcement to enter the school. After a few minutes, she said, federal marshals approached her and put her in handcuffs, telling her she was being arrested for intervening in an active investigation,” The Wall Street Journal reported.

“Once freed, Gomez moved away from the crowd, broke into a run, jumped a fence and ran inside to rescue her children. “She sprinted out of the school with them,”” The Wall Street Journal reported. 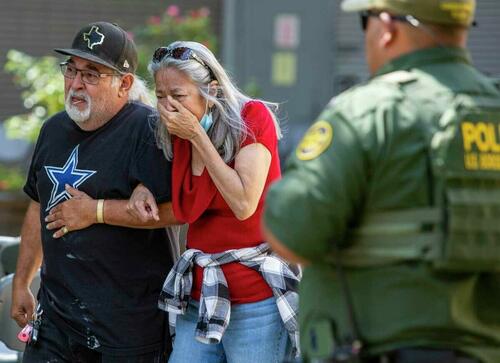 “Go in there! Go in there!” women shouted at the police soon after the attack began, according to neighbor Juan Carranza, who told the Associated Press about the parents’ efforts to get the police to confront the shooter. Carranza said the officers did not go in.

Except to save their own children?

It's not super explicit but this does sound like Texas DPS spokesman Lt. Chris Olivarez confirming that cops entered the school to save their own children during the shooting while police were holding back families and refusing to go in outside. https://t.co/YNRZ1ObxwA

At 1:26 the DPS spokesman above does say that a police officer did enter the school and did

remove his child
0
Curious - what do you think about the officer removing his child while cops are handcuffing parents trying to save their own children??x
.  I do know of a mother who was handcuffed, talked her way out of the handcuffs, and then bolted for the school where she got her child and ran out.

Always have an adequate weapon near you or on your person.  Yahusha (aka “Jesus”) commands to be armed, and he also said don’t make up an excuse about weapons “costing too much”.  He said sell stuff until you have enough money to arm yourself.  DO NOT THINK THE POLICE WILL SAVE YOU.

“Let’s just rush in because the cops aren’t doing anything like they are supposed to,” said Javier Cazares, whose daughter was killed in the 40-minute #RobbElementary school massacre in #Uvalde

This footage shows armed police pinning one man to the ground pic.twitter.com/3rUkeFqAX2 https://t.co/w7D3G3666J

Listen to the poor woman in the audio background weeping.  Look at that cop with the taser in his hand.  In the dirt behind him more gutless yellow cowards are holding down a man who wants to save the lives of the children.

More and worse will happen.  I guarantee it and you already know it.  We all must be mentally and physically prepared to fight to defend the defenseless, and pay attention “law enforcement officer”, if you find yourself in a similar situation in the future, if you lack the courage or the character to attack the enemy, then pray to God that He gives you the wisdom to stand aside while better men and women than you take the fight to the enemy.

God showed us this week that we are absolutely on our own.  No one will save us and we must prepare smartly and discretely to do whatever is necessary to defend our people.

You are exactly correct Jerry. This is an event which clearly shows that our society has fallen. We are seeing the results of depravity and I don’t think we can curve it for the better. We may be able to subdue it or minimize it if the correct actions are taken at the correct timing but chaos is our future. The next 10 to 15 years on earth is literally going to be hell on earth. And this is the beginning of the birth pains as Yahuah begins to judge the entire world. The war within the spiritual in the unseen dimension is manifesting itself into our 3D matrix and we will visualize celestial things we can’t even fathom. The end is near. Time to organize, train, weaponize and act as citizens should act even if it means being disobedient to those in power. Notice I did not say those that have authority. They do not have Yahuah’s authority. None of them if not in Christ. Only those in Messiah Yeshua have authority. Luke 10:19. Only us.

Paul teaches to obey the magistrates, or state authority, as they are appointed over us and governance ostensibly is for our good. But when the governance is killing children, including abortion, then the government serves satan, a religion we are called out of. Obedience to Truth comes at a cost, and in these end times, the cost will probably be our lives. Nonetheless, better to die a free and righteous man than die a dog, groveling for scraps to stay alive. We are commanded to be armed for a reason, and no excuse is accepted.

I can absolutely accept your conclusion. Yahuah has revealed to me that we are in the end times and our government does serve satan and we must disobey them not under the authority of Yahuah. Time to organize, train and protect. Thank you brother Jerry for bringing truth forward. May He protect you.

Today when the police admitted that they were told to stand down, they said the order came from the chief of police for the school district. Who would that be? Did you hear that also?

I don’t know, but that job position would be an ideal one for the freemasons to target for occupation. They would want their man in that position.

Worse – I think they were ORDERED to STAND DOWN – just like in the 2020 riots (remember, this is an ELECTION year). This wasn’t collective cowardice – this was a politically organized message, possibly to Latinos who are turning from voting Democrat (communist) to Republican (mostly RINO, but some Christians / conservatives).
The cowardice meme is PREFERABLE to the TRUTH. No way they 1) arrived, 2) saved their own, 3) PREVENTED parents from entering to do the same, and 4) Still collect future paychecks instead of firings / lawsuits, and NONE of them worked to save the teachers / kids to be slain, without command “guidance.” Worst, a Luciferian sacrifice of innocents, ordered by the PTB.

Well, there is no way that the school would have left the door/gate unlocked because that school has had over 40 lockdowns this school year due to the illegals streaming through town. So locking the doors would be habit, second nature. And the killer stood in front of the school shooting up and down the street for 12 minutes, yet still had time to get into the building and start shooting kids before the cops showed up?? That’s when a cop rolls up, pulls his rifle out of the rack and pops the shooter in the school yard. And for 12 minutes of shooting outside NO ONE in the school locked the doors??