I have done some interesting reading this Sunday morning, and am learning some things about government that, naturally, are bad.  Why is it that government continually ends up being the enemy that is always overthrown in the end? That seems to be correct, does it not?  What government governs today that governed 1000 years ago?  5oo years ago?  300 years ago?  None or very few, and I do not know of any government ruling for over a few hundred years.

An argument can be made that the Royal family in London has been around for perhaps the longest, but I don’t think they actually rule.  Rich, yes.  Influential, yes.  Part of the global government, yes.  I even read that the Crown is the de facto power that rules all nations.  I need more proof of that, but for sure the Crown exerts major strength on the planetary level.  That “royal bloodline” they fight to preserve originated somewhere, with someone, and they seem desperate to preserve it.

Ok, a question just popped into my mind.  What color are the Queen’s eyes?  This is a test.  The most reported colors are green and blue.  My eyes were green from birth until about 17, when they started changing color.  By 30 or so, my eyes were and are today blue.  So eyes do change color.

More on the Crown Corporation in the future.  What this post is about is the United States very own IRS.  You know, the tax collectors.

I have a video here that you should watch if you live in the USA.  It addresses, among other things, why the IRS insists you pay them even though the Federal Reserve bank (a private bank not part of the US government at all) provides all the dollars the government asks for, for a profit.  The government does not need tax money.

Note: The 19 trillion dollar bill just passed by Congress and signed into law by the illegitimate President Biden creates debt that you cannot imagine.  From the birth of America to February, 2021, America amassed “only” about 4 trillion dollars in debt.  But at the stroke of a pen, the monsters ruling America quintupled debt that had taken hundreds of years to grow to 4 trillion dollars.

This is obviously a brain-breaking sum of money, and it is likely to create a cascade of inflationary actions that drive up the cost of everything to unimaginable amounts.  The scripture that tells us a days wages for a jar of barley is at the door.  You will spend all you have to have enough low-grade food to stay alive.  That is coming, and I suspect we will arrive there before the end of this very year.

The chart below is from the Federal Reserve, and is called “M1”.  M1 is how much money, how many dollars are in circulation or available to spend world-wide.  US dollars.

The problem is obvious.  With that much money instantly dumped into the world financial system, the price for everything will rise in a manner that reflects the relative scarcity of dollars.  In this case, there is a massive oversuppply, resulting in the price of everything going up.

Reflecting this fact is that Bitcoin popped up from $45,000 per coin to $60,000 per coin in the two weeks leading up to the signing of the bill.  Bear in mind that bitcoins actually have value that paper dollars do not. Bitcoin can be used all over the world nearly instantly with no identification required.  Additionally, no one knows who the buyer is, so its private, portable and fast.  That security is valuable, especially in a world ruled by devils. 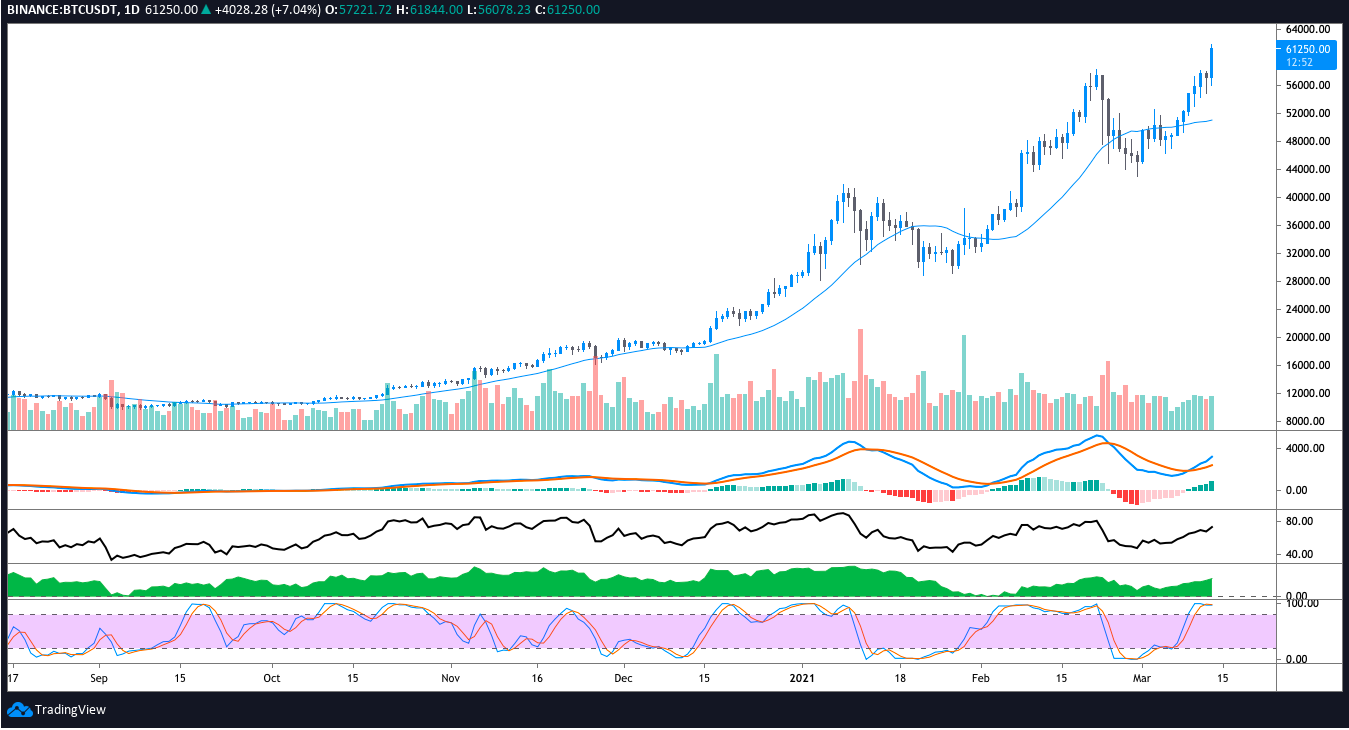 You can read more about this Bitcoin chart here.

Remember as you prepare to pay the IRS money which is totally unnecessary that the value of the dollar is about to plummet, while the value of a digital coin is skyrocketing.

Look into crypto coins as an investment, and you might make that a priority now.  There is a lot of information available, but about three solid days of study should get you in position to make a good decision.  If the value of your crypto coin (like Bitcoin) goes up faster than the cost of food, you are in pretty good shape.

Hi Jerry
To understand the British Crown you need to read:-
‘The AntiChrist and a up of Tea’ by Tim Cohen

Will do. Have it on my other open tab. Thank you. You are a fine sister, Gill.