“Peace and safety” they will say, and sudden destruction comes upon them.  Is this the result of a contest for power between Saudi Arabia and Turkey, both which burn with lust for power in the Middle East?  There is possibly the power play of all power plays taking place between the two major Islamic players in the Middle East, with the Temple Mount in the center. END_OF_DOCUMENT_TOKEN_TO_BE_REPLACED

Stampede the herd. That’s how globalists and war mongers manipulate the masses. First, create a problem. Then identify the cause, and finally, act on an acceptable solution. Classic Hegelian Dialect.

The quotes below are only a few of the dozens of headlines blaming Iran directly for damaging the Saudi oil facility, and maybe Iran did. But I know that if I were Iran, I would NOT USE MY OWN weapons to do it, as those weapons would be potentially identifiable after an investigation. As of this writing, I have seen zero evidence of any weapons at all, much less identifiable Iranian technology. And isn’t the weapon usually destroyed with the explosion, leaving behind little proof of origin?

RIYADH, Sept 16 (Reuters) – The Saudi-led military coalition battling Yemen’s Houthi movement said on Monday that the attack on Saudi Arabian oil plants was carried out with Iranian weapons and was not launched from Yemen according to preliminary findings.

The Washington Post – RIYADH, Sept 16 (Reuters) – The Saudi-led military coalition battling Yemen’s Houthi movement said on Monday that the attack on Saudi Arabian oil plants was carried out with Iranian weapons and was not launched from Yemen according to preliminary findings.

The Times of Israel – Iran fired dozens of cruise missiles and drones in a Saturday attack on Saudi oil facilities, a senior official in the Trump administration told ABC News on Sunday.

Instead, US officials have insisted Iran was directly responsible for the massive attack on Saudi oil facilities Saturday which shut down half of the kingdom’s output and sent energy prices skyward.

Lets review some images, shall we? 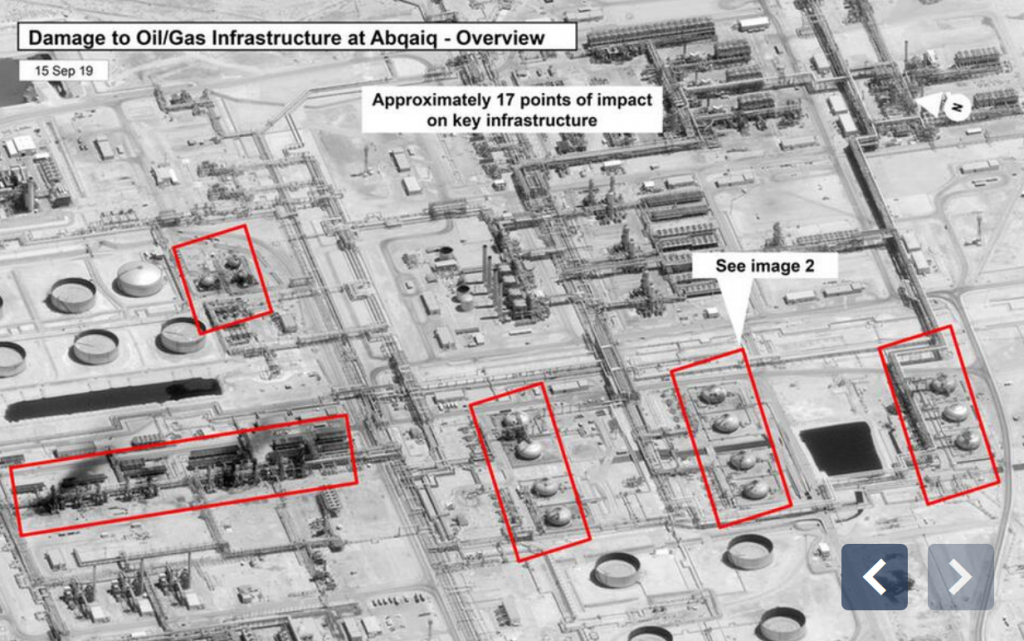 Look at the damage.  The structures are still standing, appearing even intact.  I see only some evidence of fire.  The structures appear to be only burned, or scorched.  They are all still standing, and there are no craters as one might expect in a cruse missile explosion.  And 17 strikes?  Seventeen, and no radar picked up that long train of missiles flying toward this key global oil refinery?

Note that the large, round oil containers or tanks all appear empty, too.  That seems odd for a facility that allegedly processes 5 percent of the global oil supply, as that is a LOT of oil.

Cruise missiles do a lot of damage, typically destroying every structure they hit, especially structures in the open and unprotected by blast shields.  Look at the image below and note that every building hit by a cruise missile is totally destroyed.  Doesn’t it stand to reason that if “17 cruise missiles” were detonated on the ground in Saudi Arabia, they might actually obliterate exposed structures?

This “Iranian strike” took place right after John Bolton was released from service by Donald Trump.  Bolton was Israels best war hawk in the White House.  Doesn’t it stand to reason that Israel might immediately activate “Plan B”, and strike Saudi Arabian oil processing facilities to blame it on Iran?  And since this facility processes oil for global distribution, it would get the interest of governments world wide.

I might be significantly off base here, but it does not look to me like any “cruise missiles” were used to do this damage.  It looks much more like explosives were placed by hand to do minimal damage and create significant panic.  Seventeen is a big number, and I just do not see Iran doing anything this stupid.  What does Iran stand to gain by using equipment traceable to them to start a war where everyone might be aligned against them?

Who gains the most?

Israel.  Israel gets war oriented toward its enemy Iran, and since there is an election this week in Israel, Benjamin Netanyahu stands to gain more votes.  War-time Presidents/Political leaders almost always gain votes when hostilities develop.

When is the election for Prime Minister in Israel?  Tomorrow.

The election comes just two weeks before Netanyahu, who failed to form a majority coalition government after a vote in April, faces a pre-trial hearing in connection with three separate corruption cases: Bribery, fraud and breach of trust. The prime minister denies wrongdoing.

“Netanyahu is desperate to be re-elected and to form a government because this is the only viable way for him not to go to trial,” said Uri Dromi, an Israeli political analyst.