How do we know which day is the Sabbath?

This is a fallacy that has comforted many in their disobedience to the fourth Commandment. Beside the fact that God would not allow the day to be lost, here are four other proofs that identify we still have the correct Sabbath day:

1. Many people today have never given much thought to which is the seventh day of the week. I assumed for many years that Sunday was the seventh day and Monday was the first day. You can imagine my surprise when I found out this was incorrect. An easy way to confirm this is to just look up Saturday in any normal dictionary. Here are two.

2. The Scriptures say Christ died on Friday and rose on Sunday, the first day of the week. Practically all churches acknowledge this fact by observing Good Friday and Easter Sunday. 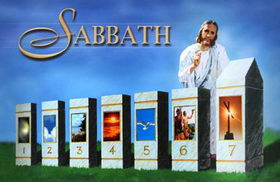 Here is the Bible evidence: “This man went unto Pilate, and begged the body of Jesus. And he took it down, and wrapped it in linen, and laid it in a sepulchre that was hewn in stone, wherein never man before was laid. And that day was the preparation, and the Sabbath drew on.” Luke 23:52-54. This clearly shows Jesus died the day before the Sabbath. It was called “the preparation day” because it was the time to get ready (to prepare) for the Sabbath. Verses 55 and 56 go on to say, “And the women also, which came with him from Galilee, followed after, and beheld the sepulchre, and how his body was laid. And they returned, and prepared spices and ointments; and rested the Sabbath day according to the Commandment.” Note that the women rested over the Sabbath “according to the Commandment” and that the book of Luke was written decades after the cross showing the Sabbath unquestionably remained unchanged. The Commandment says, “The seventh day is the Sabbath,” so we know they were observing Saturday. The very next verse says; “Now upon the first day of the week, very early in the morning, they came unto the sepulchre, bringing the spices which they had prepared… And they found the stone rolled away from the sepulchre.” Luke 24:1-2. How clearly these three consecutive days are described for us. He died Friday, the preparation day, commonly called Good Friday. He rested in the tomb on the seventh day, Sabbath, “according to the Commandment.” That was Saturday. Then on Sunday, the first day of the week, Easter Sunday to many, Jesus arose from the grave. Anyone who can locate Good Friday or Easter Sunday will have absolutely no difficulty finding the true Sabbath day. See also Wednesday crucifixion.

3. The third proof lies in the fact that in over 100 languages of the world, the seventh day Saturday is still called the Sabbath. In Italy it is called Sabbato, in Spain Sabado, in Portugal Sabbado, in Russia Subbota and Poland Sobota. All of these names mean “Sabbath” or “rest day” in their various languages. What does this prove? It proves that when those 100 languages originated at Babel in Genesis 11, Saturday was recognized as the Sabbath day and was incorporated into the very name of the day. Except for those languages that have adopted the pagan names for the days of the week, the seventh day is still called the Sabbath as the Lord named it at the time of creation. Strong’s dictionary shows the word translated “rest” in our English Bibles in Genesis 2:3, is actually “Sabbath” in the Hebrew. See who changed the Sabbath to Sunday or what day is the Sabbath for a table of languages.

4. Here is the most conclusive proof of all for the true Sabbath. The Jewish people have been observing the seventh day from the time of Abraham, and they still keep it today. Here is a whole nation, millions of individuals who have been counting off time meticulously, week after week, calendar or no calendar, for thousands of years. Could they have lost track of days? That would be impossible! The only way they could have lost a day would have been for the entire nation to have slept over an extra day and for no one ever to tell them about it afterwards. There is no scientific or astronomical reason for measuring time in cycles of seven days. The origin of the week is found in the creation story and it is an arbitrary arrangement of God and has been miraculously preserved for one reason, which is because the holy Sabbath day points to the creative power of the only true God. It is a sign of His sovereignty over the world and over human life, a sign of creation and redemption. Is this not the reason God will preserve Sabbath keeping throughout eternity? We read in Isaiah 66:22-23 “For as the new heavens and the new earth, which I will make, shall remain before me, saith the Lord, so shall your seed and your name remain. And it shall come to pass, that from one new moon to another, and from one Sabbath to another, shall all flesh come to worship before me, saith the Lord.” The Sabbath is so precious to God that His true Children will observe it throughout all time to see in the beautiful new heavens and the new earth. If the Sabbath is so precious to God then why isn’t it precious to us? If it was made and kept since creation and we keep it for all eternity, then why isn’t everyone keeping it now? See the Sabbath to Sunday change for the answer.