Has the Calendar changed the Sabbath day?

The calendar has been changed but it was never changed so as to affect the weekly cycle of days or confuse the days of the week. We can be one hundred percent positive that our seventh day is the same day Jesus observed when He was here. Pope Gregory XIII was responsible for a calendar change in 1582, but it did not interfere with the weekly cycle. Our present Gregorian calendar was named after him when he made that small change in 1582. 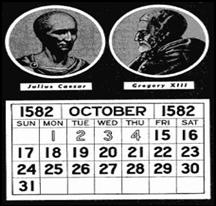 What did Pope Gregory XIII do to the calendar? Before 1582 the Julian calendar had been in effect instituted by Julius Caesar about 46 B.C. and named after him. But the Julian calendar had calculated the length of the year as 365 1/4 days, which was incorrect as the length of a year was actually eleven minutes less than 365 1/4 days. Those eleven minutes accumulated, and by 1582 the numbering of the calendar was ten days out of harmony with the solar system. Pope Gregory fixed the problem by simply dropping those ten days out of the numbering of the calendar. It was Thursday, October 4, 1582, and the next day, Friday, should have been October 5. But Gregory made it October 15 instead, dropping exactly ten days to bring the calendar back into harmony with the heavenly bodies. Were the days of the week confused? No. Friday still followed Thursday, and Saturday still followed Friday etc. The same seventh day remained and the weekly cycle was not disturbed in the least. When we keep the seventh day on Saturday, we observe the same day Jesus kept, and Luke 4:16 tells us Jesus did this every week.

The U.S. Naval Observatory has also reported that there has never been any change in the continuity of the weekly cycle.