We are not under Law but under Grace

Suppose a murderer has been sentenced to death in the electric chair. Waiting for the execution the man would truly be under the law in every sense of the word, under the guilt, under the condemnation, under the sentence of death, etc. 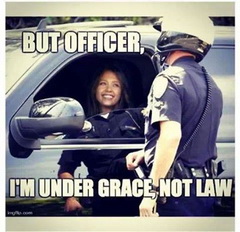 Just before the execution date the governor reviews the condemned man’s case and decides to pardon him. In the light of extenuating circumstances the governor exercises his prerogative and sends a full pardon to the prisoner. Now he is no longer under the law but under grace. The law no longer condemns him. He is considered totally justified as far as the charges of the law are concerned. He is free to walk out of the prison and not a policeman can lay hands upon him. But now that he is under grace and no longer under the law, can we say that he is free to break the law? Indeed not! In fact, that pardoned man will be doubly obligated to obey the law because he has found grace from the governor. In gratitude and love he will be very careful to keep the law of the state which granted him grace.

Is that what the Bible says about pardoned sinners? “Do we then make void the law through faith? God forbid: yea, we establish the law.” Romans 3:31. Here is the most explicit answer to the entire problem. Paul asks if the law is nullified for us just because we have had faith in Christ’s saving grace. His answer is that the law is established and reinforced in the life of a grace saved Christian. The truth of this is so simple and obvious that it should require no repetition, but the devious reasoning of those who try to avoid obedience makes it necessary to press this point a bit further. Have you ever been stopped by a policeman for exceeding the speed limit? It is an embarrassing experience, especially if you know you are guilty. But suppose you really were hurrying to meet a valid emergency, and you pour out your convincing explanation to the policeman as he writes your ticket. Slowly he folds the ticket and tears it up. Then he says, “All right, I’m going to pardon you this time, but…” Now what do you think he means by that word “but”? Surely he means, “but I don’t want to ever catch you speeding again.” Does this pardon (grace) open the way for you to disobey the law? On the contrary, it adds compelling urgency to your decision not to disobey the law again. Why then should any true Christian try to rationalize his way out of obeying the law of God? Consider carefully also what 1 John 3:4 says, “Whoever sins is guilty of breaking God’s law, because sin is a breaking of the law.” Are we sinners? If we are not sinners, then why was Jesus nailed to the cross?