Nuclear strikes against the West, or NATO but particularly and especially the United States are promised by Vladimir Putin if there is any military intervention against Russian military action in Ukraine.  This is a “back off or I will kill you” situation, and he does mean it.

Here is my primary concern.

Now that Putin has made that statement, all Iran has to do is wait for some US stupidity in Ukraine, listen for Putin’s remarks on the Biden decision to intervene and presto – Iran detonates a nuclear device in the United States and everyone looks to Russia as the bad guy.

I remember reading many years ago about Iran trying to purchase Russian-made nuclear bombs when the Soviet Union collapsed.  Some were indeed sold on the black market for around one million dollars US each, and none have been detonated yet.  Someone has them, and it is likely that it is Iran or N. Korea.  Who knows?

Nuclear weapons, when detonated, leave “fingerprints”.  The nuclear material used in the explosive consists of unique fissionable materials that are generally specific to the type or manufacturer of different formats of nuclear bombs.  I’m running on memory here from two or more decades ago, so allow me a slight margin of error.

Nonetheless, one can investigate the bomb site and get a solid ID on the materials used based on the radio signature emitted by the debris.  One can determine the concentration of different isotopes or radioactive materials and therefore determine who made the uranium or plutonium or any other material suitable for nuclear bombs.

So Russia can be set up.

In fact, the US CIA might be the proud owner of a couple of those missing Russian nukes, and could potentially pop one off in Paris or New York.  The world would be galvanized in horror, and in a few days, when the headlines read “Nuclear Bomb Traced To Russian Manufacture” – well, that would be the end of Russia.  Maybe even the end of most of the world if everyone who has nuclear weapons decided to nuke their “enemies”.

I do not think that is what will happen, though.

I think it is more likely that Biden and Klaus Schwab (who surely might be THE anti-christ or his prophet) will try to goad Russia into a large war, and I think Putin will strike first using sea-based hypersonic nuclear missiles with nuclear warheads, and that he will target fault lines and key intersections of those fault lines in the USA, creating as much destruction as possible.

I also believe he will detonate an EMP weapon or multiples of them above America to burn up the power grid, essentially closing the nation of America forever.

If he does these things, there will be no warning.  He already warned us, and he will keep his word.

The USA will strike back, probably.  This assumes that we have the capability of striking back.  What if our communications are destroyed first?  What if key government personnel are Chinese agents or collaborators?

We still have the subs, but you and I will not give a damn about any of that ever again, because we will be scratching for survival.  Water will be our primary concern, then food, then shelter and defense.  We will have our own private wars to fight.

There are too many detailed and consistent prophecies of America‘s destruction to dismiss the preceding information.  Something nationally catastrophic is scheduled by Yahuah for America.  It WILL happen, and certainly it will be sooner rather than later.

Below is an article you might want to read…

Russian President Vladimir Putin’s implied warning that he could launch nuclear weapons against any country that interferes with his military campaign in Ukraine raises questions about just how seriously the West should take such threats.

Russian President Vladimir Putin’s implied warning that he could launch nuclear weapons against any country that interferes with his military campaign in Ukraine raises questions about just how seriously the West should take such threats.

And while NATO allies, including the U.S., have assured they will not engage militarily in Ukraine, some experts suggest the Russian president’s comments should not be taken as empty threats.

“It is not something that he’s just saying offhand because he’s sort of trying to simply look tough,” says James Cameron, an assistant professor of political science at the University of Oslo, where he is a member of the Oslo Nuclear Project specializing in arms control.

“There is a rationale. There is the logic there.”

Putin’s threat of ‘such consequences’

Speaking from the Kremlin on Thursday morning as he launched the Russian military’s invasion of Ukraine, Putin said Russia would respond instantly if any external force tried to interfere.

“Whoever tries to hinder us, and even more so, to create threats to our country, to our people, should know that Russia’s response will be immediate. And it will lead you to such consequences that you have never encountered in your history,” the Russian president said.

Why did Putin attack Ukraine now?

Asked whether Putin’s use of the phrase “such consequences that you have never encountered in your history” was tantamount to threatening that Russia would use nuclear weapons in the Ukraine conflict, France’s Foreign Minister Jean-Yves Le Drian said it was indeed understood as such.

However, he said it should be clear to Putin that NATO also has nuclear weapons.

“Yes, I think that Vladimir Putin must also understand that the Atlantic alliance is a nuclear alliance. That is all I will say about this,” Le Drian said Thursday on French television TF1.

Cameron said Biden and other leaders have been very clear that there’s no real possibility of military intervention in Ukraine.

“And so in a sense … it’s not a situation where he’s directly confronting NATO with the possibility of nuclear use.”

However, Cameron said Putin’s implied threat of nuclear retaliation isn’t completely empty, as it’s part of his overall strategy “in the sense that there’s a clear co-ordination to it.”

For example, over the weekend, Putin oversaw strategic nuclear exercises involving the launch of hypersonic ballistic missiles and other weapons.

Putin’s comments, then, are a “calibrated element of the overall plan” — undertaking such exercises, making veiled threats — to leave open the possibility of a nuclear strike, Cameron said.

As well, Cameron said, Putin likely feels some element of doubt about NATO members saying they won’t use military intervention.

“He’s trying to close off that doubt by having this kind of nuclear shadow hanging over what he’s doing in Ukraine.”

Not the first nuclear threats from Putin

Gerhard Mangott, a University of Innsbruck professor of international relations who focuses on U.S.-Russian relations, said this isn’t the first time Putin has made such threats.

During the 2014 annexation of Crimea, the Russian nuclear forces were also put on high alert, he said.

As he did in 2014, Putin is “signalling that Russia is even willing to escalate with the use of nuclear weapons.”

Mangott said if the West did decide to employ military intervention, then there is a real risk that Russia would use some strategic nuclear weapons.

“This is not a real risk,” he said, because the West won’t allow it to happen.

Michael O’Hanlon, a senior fellow with the Brookings Institution think tank who specializes in U.S. defence strategy and the use of military force, said he believes Putin’s nuclear threats are part and parcel of his outlook, methods and worldview.

“He sees Ukraine as sufficiently core to Russian interests to have launched this war in the first place, so the nuclear threats are no surprise, especially in light of the fact that he’s made them before in more elliptical and general terms,” he said in an email to CBC News.

He said that since the West is not considering fighting in defence of Ukraine, Putin’s nuclear threats are less worrisome.

“I see them more as reconfirmation of the nature of the brute we are all now dealing with, and otherwise not particularly significant.”

Challenged by reporters over the effectiveness of sanctions against Russia for its actions in Ukraine, U.S. President Joe Biden said the measures were ‘profound’ and ‘exceed anything that’s ever been done.’ 2:45

Currently, Russia’s nuclear arsenal consists of about 4,500 nuclear weapons, 1,550 of them deployed on delivery vehicles, according to Mangott.

“So Russia is indeed capable to escalate this to an all-out nuclear war.” 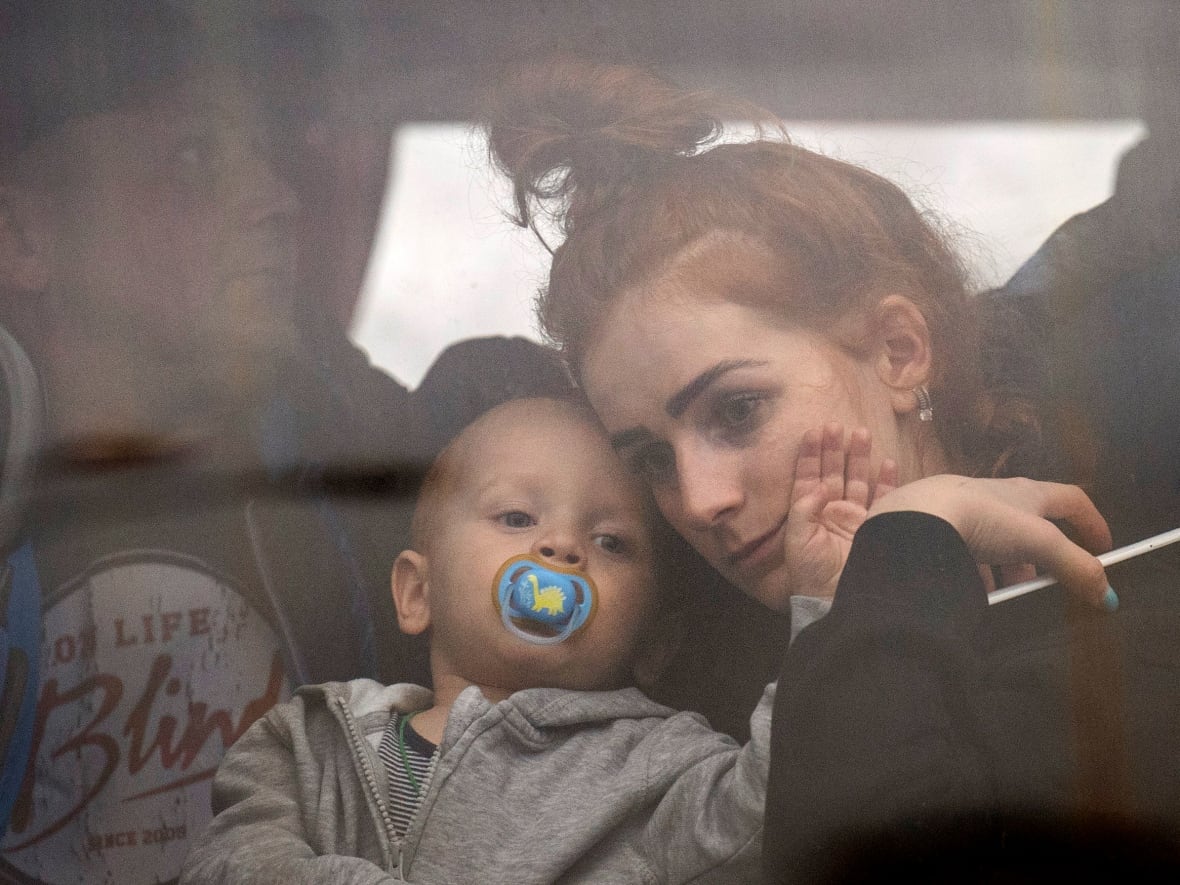 “Even the use of one of these weapons would be a world-altering event,” he said.