In fact, I am slightly nauseated as I merely contemplate writing what I am sure will come out in the text.  You see, when I write, I never actually know what is going to be written.  I just feel the urging to write whatever is percolating within my soul, and sit down and write it.  So whatever I write today is exceptional, because I have never been as reluctant to write as I have been this last week or two.

I suppose that my reluctance hinges on the probability that the open war has begun, an open war between the messengers of Yahuah and the servants of the adversary.  Whatever it is, we are in it.

Prepare yourself for that inevitable reality.

I want you to know that this whole “corona virus” mess is a contrived, pre-planned, New World Order event.  And it is only the first, the kick off, the starting gun.  When “they” say to be on the lookout for a ‘resurgence’ of the coronavirus, certainly you can expect that to happen.

The corona virus that we are dealing with is a man-made hybrid corona virus.  There are several common corona-type virii.  The one getting all the press is man-made.

Who Is Francis Boyle?

Francis Boyle is a professor of international law at the University of Illinois College of Law. He drafted the U.S. domestic implementing legislation for the Biological Weapons Convention, known as the Biological Weapons Anti-Terrorism Act of 1989, that was approved unanimously by both Houses of the U.S. Congress and signed into law by President George H.W. Bush.

In an exclusive interview given to Geopolitics and Empire, Dr. Boyle discusses the coronavirus outbreak in Wuhan, China and the Biosafety Level 4 laboratory (BSL-4) from which he believes the infectious disease escaped. He believes the virus is potentially lethal and an offensive biological warfare weapon or dual-use biowarfare weapons agent genetically modified with gain of function properties, which is why the Chinese government originally tried to cover it up and is now taking drastic measures to contain it. The Wuhan BSL-4 lab is also a specially designated World Health Organization (WHO) research lab and Dr. Boyle contends that the WHO knows full well what is occurring.

If the video disappears, please let me know.  I have more 🙂

So this man-made virus seemed to be ultra deadly in China.  Videos were very, very disturbing…

Who wants this to happen to self?  So we all become hyper tense, on guard, afraid.  A deadly virus is killing the world…

Bill Gates to the Rescue

For over twenty years Bill Gates and his Foundation, the Bill and Melinda Gates Foundation (BMGF) have been vaccinating foremost children by the millions in remote areas of poor countries, mostly Africa and Asia. Most of their vaccination program had disastrous results, causing the very illness (polio, for example in India) and sterilizing young women (Kenya, with modified tetanus vaccines). Many of the children died. Many of the programs were carried out with the backing of the WHO and – yes – the UN Agency responsible for the Protection of Children, UNICEF.

Bill Gates.  There is a man who hates human life.  His dad ran ran Planned Parenthood for years.

Many know of the racist legacy of Margaret Sanger (1879-1966), the founder of Planned Parenthood, who once gave a talk to the KKK and helped promote the “Negro Project.” In her own words, “[Birth control] means the release and cultivation of the better racial elements in our society, and the gradual suppression, elimination and eventual extirpation of defective stocks— those human weeds which threaten the blooming of the finest flowers of American civilization.” (NYT, April 8, 1923). To this day, 79% of Planned Parenthood’s surgical abortion facilities are located within walking distance of African American or Hispanic/Latino neighborhoods (Map).

Few know that this project is continued on an international scale by the enormous wealth of Bill Gates. In 1965, the Rockefeller Foundation was a significant donor to the International Planned Parenthood Federation (Source). Today, the Bill and Melinda Gates Foundation has spent billions on population control in Africa and throughout the Third World. Obianuju Ekeocha, author of Target Africa, wrote in her 2012 open letter to Melinda Gates:

Vaccine critic Robert F. Kennedy Jr. has accepted Donald Trump’s invitation to chair a panel on vaccine safety and scientific integrity, according to an article posted on the STAT website. “President-elect Trump has some doubts about the current vaccine policies, and he has questions about it,” Kennedy told reporters.

The point of this is that we are in the final chapter before Yahusha returns for His people.  I do not think there will be any “going back” from where we are now.  Gates’ plan to forcefully and coercively inject us with his magic vaccine is a plan to inject us with a chemistry which modifies our human RNA, our genetic foundation.  Your genes.

Its not about health or stopping disease.  The FBI even RAIDED a doctors clinic because that smart doctor was setting intravenous IV drips of VITAMIN C.  Yes – Vitamin C = FBI RAID.  And intravenous vitamin C WORKS against viruses.

Plus: Here (China begins C) and also Here (for children).

Its not about health, folks.  Its about terrorism on a global scale and absolute control over every aspect of you, from when you work to what your genetic structure looks like.

Decision time is coming.  If you have children, or if you have grandchildren, State will almost certainly tell you that either they get the needle or you lose the kids.

State is also likely to tell you that no “vaccine” = no “job”.  What about no vaccine = no social security benefits, or VA benefits, or college admissions or loans?  Or credit?  Or grocery access?

Worst part is this: In order to get maximum compliance, Gates/Soros/Jesuits/Mossad/Masons or whichever devilish teams are supporting the satan in this reach for power, there will almost certainly be another “resurgence” of this dirt-common “corona virus” (there is NO ACCURATE TEST for the alleged corona threat) which will have (they will no doubt tell us…) “mutated!!!” into a more deadly form, requiring emergency stampeding of the herd into the vaccine parlors to get their precious life-saving Bill Gates Signature Corona Virus Magic Vaccine.

In 2017, 1.6 MILLION people died from diarrhea, and as of this writing only 249,712 have died from “Covid-19”.  So in 2017, 600 percent MORE, yes SIX TIMES as many deaths from diarrhea but NO ONE knew about it except statisticians and medical groups who work in that field of endeavor.  Are you terrified of dying from diarrhea?  Why not?  You’ve not been vaccinated against it.

Because you were told to be concerned about it, same as everyone else.

Who do you know who actually died from this charade?

Do you know that if you go into a hospital having a massive heart attack, and they test you for a corona virus and you actually carry one of the several different corona virii, the hospital will AUTOMATICALLY classify your death as a Coronavirus death?

Its a complete charade.  The whole thing is a stage production.  They are destroying America per plan.  America has to be taken out of the picture.  First they tried to frame Trump with the Russian Dossier fabrication, framed by Clinton and the FBI.

That failed, so they tried to impeach President Trump.  That also failed, meaning they could not contiune with the effort to more or less capture the USA and make the USA a core NWO nation.

So they had to resort to the nuclear option.  First comes a man-made virus, weak and common, accompanied by a horror show of Chinese atrocities and wild media click-bait panic.  Then the gradual spread and the continual bombardment of click-bait MSM garbage reporting.

And today, people are fed up with this nonsense.  Yes, many wear the “Mask of Obedience”, but most show the “Face of Liberty”.  I have an unopened full box of 3M N95 respirator masks that I bought for my family and am keeping for my family.  But I doubt they will ever be opened.

Closing, I expect a new setup by the globalists come August or September.  A new “mutated” threat an an effort to get Trump fewer votes and some owned liberal into office.  Its all about power, folks.  Power.

I have the presence of the Holy Spirit of Yahuah within me.  I am considered a threat by Homeland Security, and have been for at least eight years.  Believers in Yahuah who have the testimony of Yahusha are considered enemies by the Federal government of the United States.

The following document was written by a Jew in the US Army.  Its a thesis presented to the Faculty of the U.S. Army Command and General Staff College in partial fulfillment of the requirements for a masters
degree

ENEMIES WITHIN: CHRISTIAN EXTREMISM, A THREAT TO THE HOMELAND

If any of these following points pertain to you, welcome to the resistance 🙂

See, I subscribe to EVERY SINGLE ONE OF THOSE POINTS.

And I actually own the exact items in the image below.  So yeah, the wicked, satan-serving deep state attempting to subvert the United States has a real problem with me and the million or millions of folks JUST LIKE ME.  They assassinated Chris Kyle, but they cannot assassinate all of us. 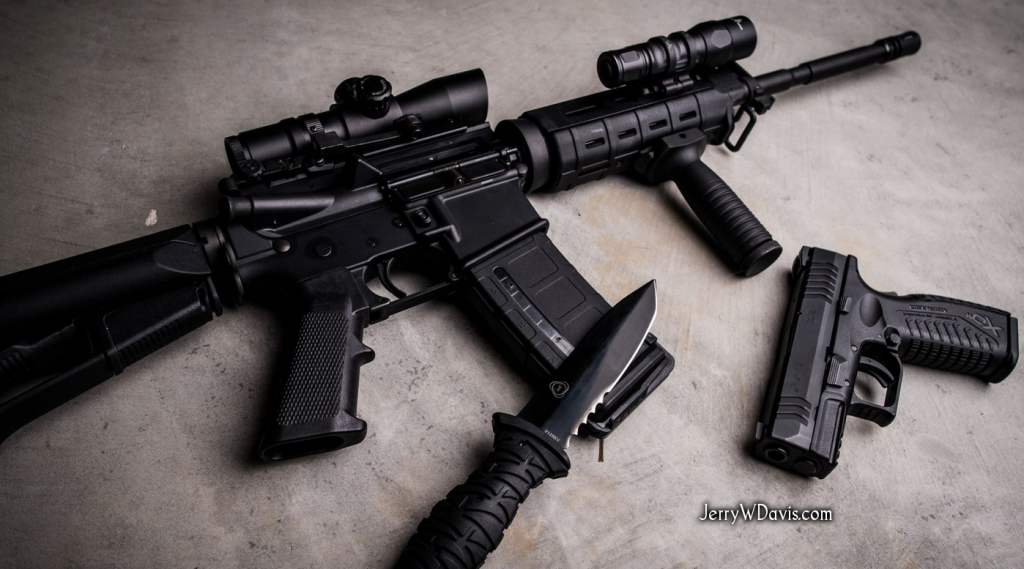 But they will attempt assassination via the ‘injection’ …

There was a major shift (spiritual) the day the us embassy opened in Israel…I heard ” This is it- it has begun – this is a deception – there is grave danger ahead” (for Israel?/for us???) I did perceive ‘someone’ was being conned….

Great post Jerry! Thanks .
Much shalom ♡ and stay strong.