I’m pumped up, excited.  More or less stunned by the information that I am about to present.  I am excited to the point that I asked my spouse to stay away from the house (buying me to-do list supplies) for as long as she can so I can get this information put together for you, and when I finish it I am going to do her entire to-do list that she so kindly left on the table, written on bold Sharpie for emphasis 🙂

Trying to keep my conversational writing style to a low simmer here.  There is a lot of info so let’s just dive straight into the deep end.

Revelation 8 – do not skip reading this.

The “Planet X” scenario might actually be about to show up.  Not because the world is so stupid, but because evidence is starting to pile up.  Really pile up.

I purposefully avoid articles and videos on the planet X topic because there is no “preparing for it” possible, and because if it shows up, we will all know it.  It will announce itself at the appropriate time.  If planet X announces itself, it is quite obviously the Will of Yahuah.

Long story short, many scientists have studied this “planet X” thing for decades.  There is general consensus and good evidence that there is a mystery planet relatively near to us, and evidence that it is moving through our local system of planets.

That’s you and me and everyone we know agreeing that planet X is approaching, and that universal agreement is just as profound as you can imagine.  It is all that will be on the news.  It is the only thing that will be in the news all over the earth.  And people will panic, badly.

Hence the probability of a “new corona virus surge – lockdown”, possibly in September.  Remember all the “September lockdown” discussions in the media?  I suppose our most wise and benevolent masters want us safe at home.  Australia just launched some horribly restrictive lockdown measures, all over a corona virus “death rate” of about 1.36 deaths per day.

1.36.  Less than two deaths per day, and the government locks them down this severely?  Not rational.  Something else is going on.

Recently a video by my brother Steven De Nun caught my eye and it was about this planet X thing.  One of the things I like about Steve’s analysis is that he tries to keep an open mind and just interprets the data the best he can without including personal bias or prejudice.  Of course he has a biblical world-view and that is the foundation of his thought process.

He has some great contacts developed over many years of hard work, and he has good character so his contacts share information with him that might be tightly controlled.  Steven protects his sources, and gives us most of the data.

The bottom line is that yes, planet X might be approaching.  I have several items of supporting evidence which I have collected over the months that were interesting to me because they were significant anomalies.  I will show you what I mean, beginning with Stevens video.

If you took notes, you will recall that Stevens emails from his insider FEMA and Pentagon contacts discussed several key factors regarding changes to the earth.  A short list:

Cracks Cracks In The Earth

Africa is ripping in half.

https://watchers.news/category/earth-cracks/
Large earth cracks and massive sinkholes opening across drought-hit Iran. Massive fissures and sinkholes are appearing in and around Iranian capital Tehran and authorities are now openly admitting the area around Tehran is literally sinking.

WARNING! Huge Cracks Are Appearing All Over The World …

https://www.youtube.com/watch?v=1COdmgGS0QM
Recently, huge cracks have increasingly appeared on the surface of the earth. Sometimes they are harbingers of a volcanic eruption, and sometimes the nature of their appearance is simply …

Enormous Cracks in the Earth Are Appearing Globally …

fourwinds10.com/siterun_data/environment/earth_changes/news.php?q=1309013424
The cracks are appearing because our earth is under incredible strain from the pull of gravity from an approaching celestial object. This tug on the planet’s equilibrium is also causing earthquakes, floods, severe weather and wild fluctuations in the earth’s magnetic field.

Huge Cracks In The Earth Surface Near Kenya Might Be …

https://wonderfulengineering.com/massive-crack-earth-might-getting-us-brand-new-continent/
In south-west Kenya, a huge crack appeared in the ground suddenly. This is perhaps the first sign that Africa will split into two continents. According to the reports, the crack is as much as 50 feet deep in some areas and is almost 20 meters wide. The crack appeared in the East African Rift Valley which runs from the Horn of Africa.

https://www.newser.com/story/192828/huge-crack-appears-in-the-earth.html
Scientists are scratching their heads over a crack in the Earth that’s more than half a mile long, Sky News reports. A drone captured video footage of the 16-foot-wide, 26-foot-deep crack, which…

A giant crack in Kenya opens up, but what’s causing it …

https://www.cbsnews.com/news/a-giant-crack-opens-in-kenya-but-whats-causing-it/
WASHINGTON– A giant crack in the Earth opened up almost overnight, 50 feet deep and at its widest 65 feet across, slicing through a highway and terrifying many who live in an area just west of …

Water Disappearing Into The Ground

Let’s start with the mighty Mississippi River, shall we…

River in Mexico disappears into a crack in the ground… 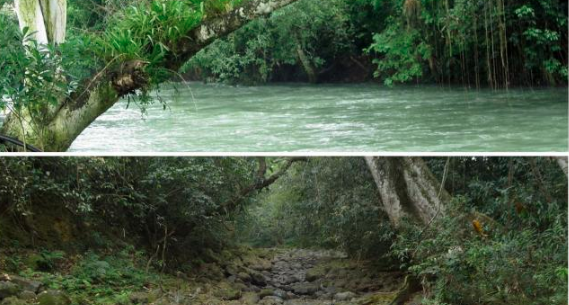 On February 28th, residents of the Rancho community of San Fermin reported hearing a loud boom and feeling the earth shake. The next morning, they noticed that the Atoyac River was gone, leaving nothing but a muddy river bed. Following what used to be the flow, they discovered a crack measuring 30 meters (98 ft.) by 20 meters (65.5 ft.) across the river bed.

I found several websites that track comet/meteorite information and tabulated some data for you from the American Meteor Society, a scientific group over 100 years old, going back to 2010 and annually through July, 2020 with “at least five reports”.  Then I made a list of fireball events from 2010-2020.  Here it is…

Chart of observed meteors observed and reported by at lease five reporting observers.

Notice the huge increase in observed and reported fireball events, and 2020 looks like it will easily hit 800 if nothing like planet X comes to pass.  But something is happening, obviously.  We have already tied 2014, and we still have five full months to go.

Bear in mind that these are fireball events, which are much more rare than the small meteorites that we all see zoom across the sky at night.  These are fireballs, blazing bright larger objects that are frequently heard as a “boom” as they cross the sky.  Often, they light up the area around them, and are quite significant.

Does this get your attention?

You might have to be a “member” (free) to get access to their statistics page.  It takes about 30 seconds to join.  And the “free” option is at the bottom of the membership list.

It is worth noting that we have also had four new ((2020…) close approach comets in August.  These are comets just discovered, and closer than the moon. Are these four new for 2020 comets part of the planet X storm?

Note: most of these newly discovered comets were NOT DISCOVERED until they passed earth closer than the moon is to earth.

Finally let’s take a look at radiation.  If a large object is getting close to earth as the FEMA scientist claims in the video at the top, it stands to reason that it will impact earths radiation levels.  Certainly causing the poles to shift in a matter of hours will create unimaginable stress within the earth.  It stands to reason that the electron flow will cause novel changes in earths radiation.

It just so happens that there is a mystery radiation anomaly recently discovered under Antarctica.  Something is causing the ice to melt under the antarctic ice.  It is radiation, and it is of an unknown type.  No one knows what is causing it, and no one knows what the end result will be.

It was discovered 24 months ago, and scientists are still guessing about the cause.  Whatever the cause, the effect is big.  Ice is melting from below, and massive streams of radiation are flying up into the atmosphere.

This is also something that the FEMA scientist suggested would result from the approach of a plant X-type large celestial body.

Taken all together – the cracked earth, big increase in fireballs year over year, surprise and damaging radiation from the south pole area and river water vanishing from rivers, it does look like a planet X scenario.  That said, perhaps these scientists in FEMA, the Pentagon and elsewhere are correct, and revelation 8 is upon us.

That makes the October Feast of Tabernacles/Sukkot quite important, as it comes after “everyone on earth will know we are in trouble” (September), and before the inferno possibly coming in the spring of 2021.  Some Bible teachers even teach of a Sukkot rapture.  The word “rapture” or “harpazo” is used in that context in the Bible.  So who knows?

This I do know – Yahuah is the King of kindness.  He can crack a whip when He needs to, but He always has the best in mind for those who follow His ways and believe His Son.

Any thoughts about the recent earthquake on NC/VA Border?

Hi, Susan. I did see the information on the earthquakes there, and tossed that information into my “this is also happening” bucket. If I lived there, it would be a concern, but aren’t earth quakes rare in that area? Do you live there?