On January 13, 2018, a false ballistic missile alert was issued via the Emergency Alert System and Commercial Mobile Alert System over television, radio, and cellphones in the U.S. state of Hawaii. The alert stated that there was an incoming ballistic missile threat to Hawaii, advised residents to seek shelter, and concluded “This is not a drill”. The message was sent at 8:07 a.m. local time. The governor wanted to warn people by Twitter of the error but he “couldn’t remember his password”.

Can you believe that?  The governor of the state of Hawaii could not remember his Twitter password to cancel an incoming missile warning? And why is he using Twitter for official state business, especially as it pertains to a probable incoming nuclear missile?

Wouldn’t the missile defense system be a more reliable platform for sending notices of warning cancellations?  And wouldn’t that “Cancellation” button be right beside the “Incoming Missile Warning” button?

This scenario stinks, and I do not believe it.

Therefore, if the whole Hawaiian missile fiasco is fake story line, then what actually happened?

In the video below, this guys sister, who works on a tour boat, reported seeing an explosion in the sky on the east coast of Hawaii the date of the warning.  There were multiple witnesses aboard the boat, and a local TV station did a story on their testimony.  The local TV news video was yanked the next day.

If this video disappears, please let me know.  I have another.

I am beginning to think that there actually was an incoming missile, and that it was shot down by the US Navy.  Here’s the twist – I think the incoming missile was fired by Deep State/CIA in order to accomplish two major things:

Deep State is in full panic mode, desperate to stop the destruction being wrought upon them by Donald J. Trump and his good people.  Hillary is looking at prison.  FBI Deputy Director McCabe just announced his resignation today, and the FBI/CIA Deep State machine is in detonation mode.

At the top of the list of the soon-to-be-wanted felons is none other than Barack Hussein Obama, who authorized several hundred million dollars to be paid to Fusion GPS for the fairy tale file that implicated Donald Trump in totally fake rubbish.  Obama is the mack daddy, the linchpin, the spider in the web.  He is the facilitator for Hillary.  While all eyes are in Hillary, it is the fraud Obama who is the devil behind the curtain.

That Fusion GPS fiction was used to get FISA warrants to SPY on Donald Trump before the election.  Any evidence of wrong doing is inadmissible in court, although there was no Trump “wrong doing”.  The Trump “Russian collusion” myth is dead.  In fact, the top FBI agent in counter-intelligence, Peter Strzok (the adulterer) said himself of Trumps alleged collusion “there is no ‘there‘ there.” He knows it is an empty charge, and he is a Deep State lackey working for Hillary.

See how deep this criminal conspiracy goes?  And this is only the tip of a huge mountain of corruption.  The exposure has not even begun to begin.

Is Special Prosecutor Mueller A Traitor?

Think Mueller is a traitor?  I certainly do.  Bear in mind that he was instrumental in covering up 9/11 truth, as he was Director of the F.B.I. on 9/11. That makes Mueller a co-conspirator.

Recently uncovered court documents related to Special Counsel Robert Mueller’s time as FBI Director show his lack of anything resembling credibility. The man who is responsible for investigating allegations of Trump/Russia collusion was involved in releasing deceptive statements that helped cover up a Saudi family’s involvement in the September 11, 2001 terrorist attacks that shocked America and helped launch the modern surveillance state.

As for his trumped up Trump investigation, why do you think he is taking so much time on a dead-end investigation?  He knows Trump is clean.  He is simply doing everything he can to cover his tracks.  More accurately, to cover his AND Rosensteins’ asses, because they were both part of the Russian bribery/uranium collusion, and Rosenstein appointed Mueller as Special Prosecutor in order to hide the proof.  Investigating Trump is only a cover story.

It also might be that Trump met with Mueller (the night before Mueller took the job) and said “You go after the pedophiles and Hillary and nail them, and I will not look too hard at this Uranium One thing.”  Mueller would jump at that opportunity.

A War Distracts Every One From Deep State Treason

A missile attack on US soil that also killed a former US President (Bill Clinton was in Hawaii during the missile attack) would stampede the American political establishment into immediate war with North Korea.  Kim Jong Un has said too much for too long and the idea is deeply embedded in the American mind that war with North Korea is inevitable.  An incoming missile from the west coast of Hawaii would immediately be assumed by all to have been launched by North Korea, and presto – the war against Deep State is over.

Only the CIA Directorate of Operations , a dark black ops directorate with almost limitless funds from drug sales, has the money, personnel and motive to possess and deliver a nuclear warhead from a sea-based launch platform.

What U.S. Government agency would have the ability to raise its own “Dark Fleet” outside the regular chain of military command and Presidential executive authority? The only U.S. agency capable of doing so is the Central Intelligence Agency (CIA). More specifically, we are talking about the CIA’s Directorate of Operations (formally Clandestine Service) which runs all its global covert operations, where a Dark Fleet would have been developed to meet operational requirements.

Bear in mind that CIA/Deep State is in an active war world-wide in order to establish a world government.  We, the people, led by Donald Trump, stand very firmly in the way of their world-dominion.  Anything goes, as far as the globalists are concerned.  This war is for ALL the marbles.

No Deep Stater did more to weaken the USA than Barack Hussein Obama.  A fraud from day one, he kissed rings, demoralized Americans, obeyed Soros, assassinated Chris Kyle, homosexualized marriage, armed every government agency nation wide, sold uranium to the Russians and much more.  Obama is the leader of the American part of the globalist equation, the public face of capitulation.  “America is not a Christian nation”, he said.

And Barack Obama hates the Clintons. 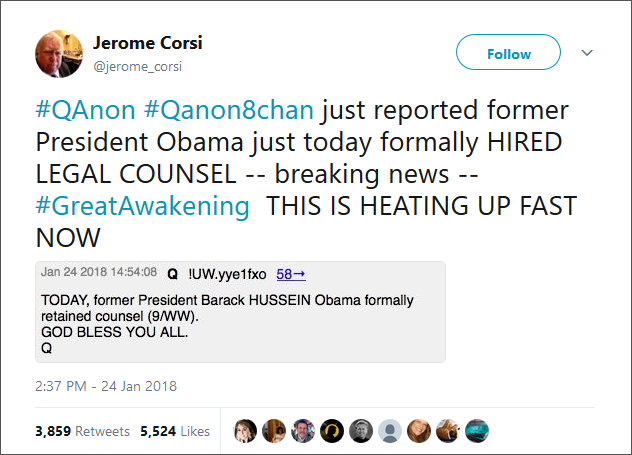 Since the likely CIA attempt to start a war failed (so far – watch out for a major event stateside, next), and since the felons running the FBI are jumping ship, Obama concluded that he better “lawyer up”, and lawyer up he did.

The Vault rankings state “USA”, but the expertise of these folks in Constitutional Law does indeed rank them globally.  They are the absolute proven and tested best at constitutional law issues.

Gibson, Dunn & Crutcher LLP
Gibson Dunn is perhaps best known for its litigation practice, particularly its appellate and constitutional law groups. The American Lawyer named the firm the 2016 Litigation Department of the Year, an unprecedented third win in this biennial competition since 2010. This followed the Gibson Dunn’s also-unprecedented back-to-back wins as 2010 and 2012 Litigation Department of the Year, and 2014 finalist honors. In making its selection, the publication noted that the firm’s current attorneys have argued over 100 cases before the U.S. Supreme Court.

Donald J. Trump has read much of the same evidence that I have, and he knows for certain that the alleged “birth certificate” is a forgery.  It has been repeatedly proven by excellent investigators that Obama ran on fake credentials.  But in the campaign to become President, Trump said that he believed the birth certificate was real.

Why did he say that?

Because he was in the heated battle of the campaign, and the last thing he needed was a huge distraction like this.  He has to knock off his opponents and the best thing he could say was that he thought it was real.  That killed the possibility of any “birther” controversy, and was the correct action at that time.

But times have changed.

Trump, like all rational, sound-minded and thinking Americans, knows that Obama is a criminal.  We know the birth cert is phoney.  And Trump knows that Obama/Soetoro paid money to buy a fake Fusion GPS file to use in FISA Court to illegally obtain a spy warrant against Trump to use during the campaign to help Hillary.

Mr. Trump is very angry, to be sure.

Trump knows how to fight nasty, bloody battles.  Obama knows how to lie, cheat and steal.  Obama is more like a gay pimp, pitching his lies to his peeps, while Trump is more akin to the Incredible Hulk, who is sometimes the brilliant Dr. Bannon, and other times the colossus of destruction.

Mark my words – Trump will take Obama down.

According to the November 29th Business Insider,

President Donald Trump is privately reviving a conspiratorial crusade that thrust him into the political spotlight, according to The New York Times, which cited sources as saying Trump had recently renewed doubts over the authenticity of Barack Obama’s birth certificate.

One senator who listened as the president revived his doubts about Mr. Obama’s birth certificate chuckled on Tuesday as he recalled the conversation. The president, he said, has had a hard time letting go of his claim that Mr. Obama was not born in the United States. The senator asked not to be named to discuss private conversations.

From the Huffington Post, a fecal source, I admit, but…

Trump has been questioning Obama’s birth certificate in “closed-door conversations,” according to The New York Times, which cited an unnamed senator as being part of one such discussion.

When Trump said he was going to drain the swamp, he meant it.  When the water is gone, the swamp creatures will have no where to hide and their life support system will be dead.  But before the swamp is dry, there will be one heck of a fight.  Be ready to do your part.  Share this article everywhere.