This is a topic that I do not like writing about, but it needs to be put out there. If I do not warn, the blood of the dead is on my head.  So I warn.  This is disturbing to write about because everything in this article combines to be one of my primary concerns.  This threat is not only plausible, but likely.

If I wanted to conquer the United States, I might lead with one or more EMP weapons (electromagnetic pulse – nuclear; gamma radiation kills electronic devices.  No electricity, no fuel, no car ignition, no food, no water and no return in your lifetime.  Short lifetime.  Weeks.)  to shut down the power grid.  I would do this in order to break the back of the civilian population, to create maximum internal strife and urban war within the cities, because killing the grid is guaranteed to be an extinction-level event for most Americans.

Remember that China absolutely wants the United States farmland, and genocide in America is guaranteed if China gains the upper hand.  We are already in a fight for our very lives, and it looks like the “big one” is on its way.

Knowing that the EMP strike would lead to a military retaliatory strike against me by my enemy, I would also use my “first strike” advantage to hit as many of his military assets as possible, with emphasis on assets that could harm me or defeat my plans.

Listen to most of this video. The retired military speaker is a long-term nuclear war analyst and consultant to the White House.  He is qualified to offer his analysis of what we are facing.

Now consider that Russia believes she is in the battle for her very existence, which Putin and Lavrov have said in public many times.  Russia states plainly that she will use nuclear weapons to prevent her demise, yet the fools governing the west insist on making an enemy of Russia.  We don’t have to trust Russia, but we should not automatically relegate Russia to the “Enemy” column, where that have been for maybe 100 years.   But when America’s primary export product is war, then the war-mongers must have enemies, otherwise – no weapons are bought and no profit is made.

Bear in mind that Russia and China both have troops and equipment (tanks, etc) on the ground in Central America.  And in a week or two there is a big military exercise in Venezuela wherein sniper teams from 13 nations, all enemies of the USA or allies of Russia or both will compete.  Sniper teams.  The elite from 13 nations, and consider the porous border of the USA. 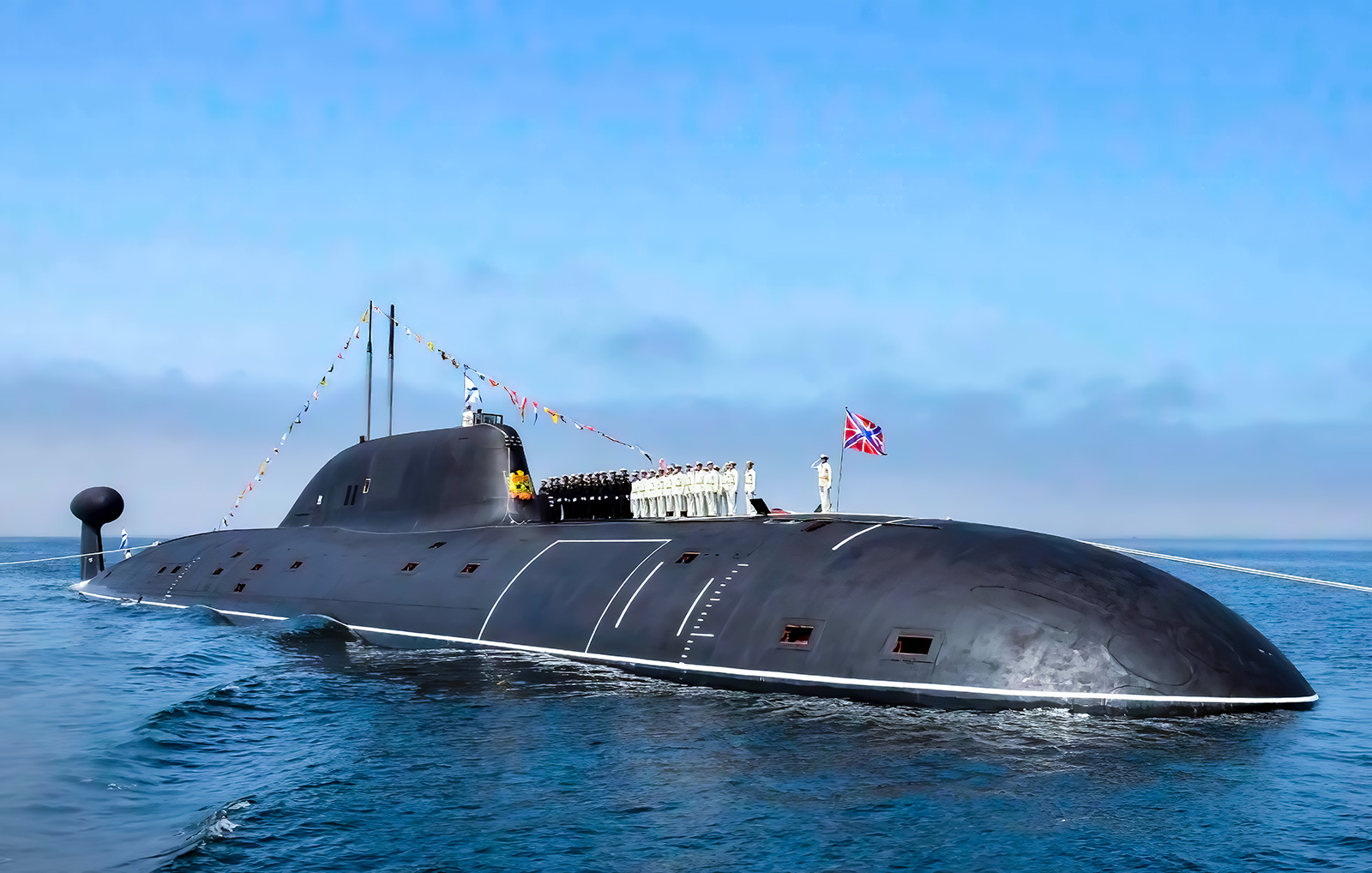 Now consider that the Belgorod is specifically built to fire the Poseidon nuclear-powered nuclear-warhead torpedo.  The video below says that the torpedo is as long as a school bus, which is too short.  A school bus is about 42 feet long.  This undersea nuclear missile with a 100 megaton nuclear warhead is twice that size.  The Belgorod is the only submarine in the Russian fleet that can transport and fire this nuclear weapon, and the nuclear payload is massive.

The Belgorod is, according to Russian information, headed to the Pacific ocean where the USA has a huge naval presence to counter China’s “conquer all” expansion.

Maybe the Poseidon (capable of autonomous navigation for thousands of miles under sea and at very high speed) could be a carrier battle group killer, but it is specifically designed to be a tsunami weapon.  I suspect that the Belgorod is planning to detonate at least one Poseidon (I do not know how many the Belgorod can carry) on the coast of California, where the Navy has a huge presence.  If the US Navy loses all of its west coast bases, there will be no resupply to the US fleet in that war.  We will run out of fuel and ammunition and likely be defeated.  This weapon could also and perhaps easily trigger the various earth faults under ground, creating the fatal and final demise of the west coast.

The second role is one of nuclear strike and deterrence. For this she will be armed with six ‘2м39′ Poseidon torpedoes. These are a whole new category of weapon not fielded by any another navy. They have been described as ‘Intercontinental Nuclear-Powered Nuclear-Armed Autonomous Torpedoes’. At over 20 meters (65 feet) long they are in effect they are giant underwater drones with practically unlimited range and a nuclear warhead. And their expected performance (around 70 knots and 1,000 meters depth) mean that they cannot be countered with existing weapons.

The USA will get her licks in, for sure.  Moscow will be turned into dust, but the Russians have prepared underground for decades and are well prepared to survive a nuclear war.  The US Federal government is also prepared, but you and I are not invited.  We needed to replace and retune our government decades ago, but oops.  Now we get to pay for our slothfulness and anti-christ viewpoints and opinions.

People who disregard prophecy deserve what they have coming to them.  Yes, we must be wise in what we choose to believe.  This prophecy is from 1929, and the prophet did not know what he was seeing until many decades later.

I began to see this vision and the Lord showed me. I looked up, I saw what answers to the description of an I.C.B.M. (Inter-continental Ballistic Missile). Just as real as any picture that you would see, or the real thing, if you’ve ever seen one of those missiles. It was just as real as you would look upon one if it were right in front of you, two or three feet away.

Many additional prophecies.  There are not just a collection of random prophecies, but prophecies that I prayed over, and that my discerning spirit permitted me to include on this website.  Like most people, we tend to be skeptical of prophets and we need to see a history of accuracy.  So be careful about what you believe, nut be wise in paying attention.

The link here takes to you a series of pages, all prophecies.  I encourage you to read all of them because they are warnings to all of us that there is an end coming.  But there is also light and hope which will be present among the people who follow the commands and have the testimony.   We are rightly concerned, and fear is a built-in response, but in our fear and concern we have the life of Yahusha as He manifests Himself within those who are loved by His Father, Yahuah.  Only of we keep His commands, says Yahusha, will the Father love us, and only of Yahuah loves us will Yahusha manifest Himself within us.

Therefore willing and humble submission to the commands of Yahuah and eager acceptance of the offer of life from Yahusha results in the presence of Truth within us.

There is only one path to life, and that is through Salvation in Yahusha.  Those who are called by Yahuah and chosen by Yahuah (two different processes) will dwell in the Truth because they received the love of the Truth when it was offered.

2nd Thessalonians, 2:10And with all deceivableness of unrighteousness in them that perish; because they received not the love of the truth, that they might be saved. 11And for this cause God shall send them strong delusion, that they should believe a lie: 12That they all might be damned who believed not the truth, but had pleasure in unrighteousness.

You want to live?  Choose life.

As I mentioned to you in the email, I am aware of the warning. And there are far greater warnings that that. Putin himself stated that they will use nuclear arms if necessary. You must read what I write and pay attention to it. Every day I put more data in front of thousands of people, 10’s of thousands. Pay attention. We are being surrounded in the south by Chinese and Russian troops, in the west by China and the Russian nuclear tsunami weapon Belgorod, in the north by Chinese troops in Canada (I have seen them) and in the east by Russian subs and from direct strategic nuclear first-strike weapons from Russia.

Jerry HI! Can you.identify who the harlot is? I recon it must be apostate Israel because there will be no sound of a bridegroom or of a bride ever heard in her again Rev. 18:19. The reason I ask is because Yahuah El Shaddai, puts it into the hearts of 10 world ruling powers to burn the great harlot with fire (Rev. 17:16-18), I reason it must be WEF and/ or WHO who are identified as the little horn that springs from the wild beast. I make that evaluation owing to the prophesy of Daniel 7:8-12 in reference to the small horn that springs up from the wild beast. The wild beast being Britain and American world power. I identify that small horn to be WEF without a doubt owing to the eyes of that horn or ruling power by intended observation following forced compliance of all those who survive the virus jabs to then be forced to accept microchip implants that they say will let their great leader know the thoughts of all inorganically transformed human animals better than they know themselves.

Of course China and all the rest of the world are heavy in surveillance but the WEF boast about changing human animals as they put it from organic (animals) into inorganic by their great science and by their IBM Cloud and their Microsoft Cloud. And their words certainly prove to be by that mouth speaking grandiose things saying ‘there is no god in the sky and no Son of God, for we are gods by our great science and by our Clouds. Our Microsoft cloud and our IBM clou’d.

The heavens of the heavens cannot contain the Most High as recorded from the words spoken by King Solomon when dedicating the first temple saying ‘The Heaven of the Heavens themselves cannot contain you! So how much less then, this house that I have built?” 1 Kings 8:27. That scripture proves Yuval Noah Harari, Chief advisor to Professor Klaus Schwab is right saying there is no god up in the sky above in the clouds but he cannot envision the Great Power of the Almighty Creator that will act now that these grandiose words are being spoken when judgment will be executed against this small horn.

I don’t know, June. None of that interests me any longer. I can see the writing on the wall and my objective is to shout warnings to the few who have ears to hear, and to prepare to do whatever is necessary to defend my family, my church and my friends. I am prepared to lose my life, and I am prepared to cost the enemy his own life. The war is on, and although we in America live in peace mostly, travail is already coming and hard choices are pending.