I thought some of you might find interesting the data I have regarding attempts to harm JerryWDavis.com.  Below are a couple of images that give you some numbers on attempts that have to be stopped on a monthly basis.

In the image above, you can see that just today, November 29th, 2022, there have been 1,598 complex attacks and 180 brute force attacks.  TODAY.  These attacks took place in the first 12 hours and 30 minutes of this date.

That is quite the brisk rate of attack.  Lots of computers spread around several countries, most of them NATO countries, trying to break in.  The Brute Force attacks were at one time the most common.  Brute Force is when you just run hard and fast at your target trying variations on usernames and passwords until you get in.

About a year ago the emphasis switched to Complex Attacks.  Complex Attacks use learning software to try various combinations of exploits, looking for a vulnerability somewhere in the site itself, and these are only the strikes against the site proper.  There are other attempts elsewhere in the network.

Below is the image of Countries of Origin of these attacks.  Note that Germany is the most common country of origin for these complex system attacks, followed by the United States.  I always find that odd, because Germany is little larger than Colorado, USA.  It could be because there is a treaty allowing NATO members to spy on American citizens, then they share their findings with the USA, because there is a “law” that prevents the US government from directly spying on Americans.  As if the government gives a damn about the law, which you see momentarily.

Notice that these attacks are for the last seven days only.  The total for the month of November up until today (29th) is over 32,000 attacks, and if any single attacks ever breeches the wall, we could lose years of hard work.

I learned a thing or two from the last break-in. 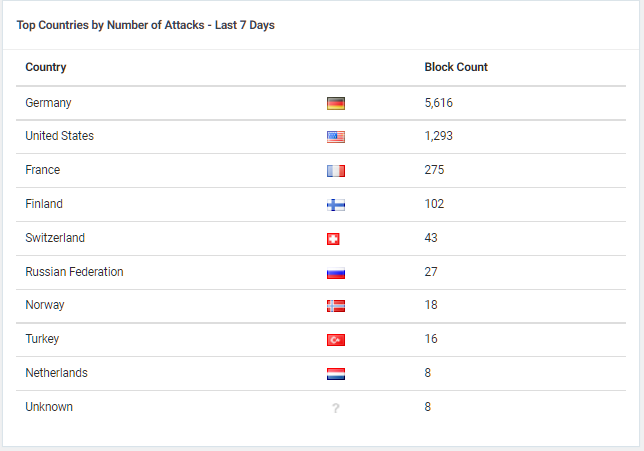 These servers are all located in the same building, and are components in a specific organization.  Let’s see who we are dealing with… 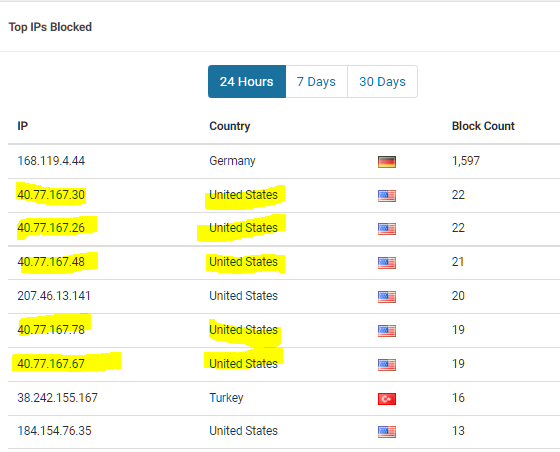 Taking a quick look, we find that Microsoft purpose-built a “government” datacenter in Boydton, VA.  These are indeed government servers launching these attacks.

The Boydton site has strong fiber connectivity from existing routes supporting a government data center in the region. The fiber optic network of the Mid-Atlantic Broadband Cooperative (MBC) was described as a”key component” in Microsoft’s decision to locate in Virginia. The 175-acre site features a 40-acre graded pad. The site is served by Dominion Virginia Power.

Microsoft has invested over $2 billion into the project since 2010.

Microsoft is clearly in business with the NSA and the CIA, and here is additional proof…

Microsoft is actively colluding with the NSA. No software company has been quite as collaborative with the NSA as Microsoft has, e.g. in providing direct Skype access. But this is not the story which the media tends to tell; instead it focuses on companies like Facebook and Google.

Microsoft offers back doors at the operating systems level, not just the Internet/communications level; the NSA as a whole has come to share a bed with Microsoft (even staff intersections exist) and this technology giant, Microsoft, also receives payments for these abuses of privacy. e.g. from the CIA, based on clear disclosures (leaks).

The following articles cover examples of some of the ways in which Microsoft actively spies on people, directly (for its business interests) or as a proxy for governments.

So now we have more proof, as if we actually need more proof, that the facist government of the United States is actively working to kill off JerryWDavis.com.  They could kill me, I suppose.  That would do the trick and not one single subscriber would know I was dead.  If I ever stop publishing for more than two weeks, I’m probably dead.  Sometimes I am away from electricity for a couple of weeks.

Interesting, yes?  My security is pretty good.  Bomb proof?  Don’t know, but I thought some of you would find the data interesting.

The Truth is difficult to stifle.

Thank you for sharing because now that you have thousands if not hundreds of thousands of us know and we will also be watching THEM!!!!! They can’t continue to get away with all they have their world is crumbling little by little as we speak. Whats a good server to get away from google? Please let me know!!!
Thank you for all you do:)
Susu

Hi Susu. Getting away from Google will just get you into some other biased search engine. There aren’t any good ones. I did try Yandex a few times and got good results, but it also frequently rendered search pages in the Russian language, so I went back to Bing, which is worse than Yandex but the bad results it gives me are in English 🙂 Dogpile might be ok. Brave Browser Search is very weak. DuckDuckGo is less bad than Brave Search, but still biased, weak and bad. Startpage – might be better but I’m a little suspicions of that one so I haven’t used it in a decade. There are more. If you find a good one, post in the comments.

Evidently, you are over a target and have gotten their attention!

Rosa Koire Behind the Green Mask. Not all people have heard of her, but she was an expert on the UN agenda. Step by step. Sadly she has passed on.
https://www.youtube.com/watch?v=o8-bcAwc28s Rosa did these videos 10 years ago and amazing how she is and was 100% with her knowlege. Prayers for our Nation, as well as all Nations. God Speed