The key word in that heading is “stratosphérique”, and it likely applies to you, too.

This is a French news article that lays it all out for the French people, citing the 1000 percent increase in electricity prices that the French can look forward to ion the spring of 2023.

A year ago, prices for these two countries were around 85 euros / MWh. Several causes are behind the course explosion, starting with the drying up of Russian gas flows to Europe since the start of the war in Ukraine – many thermal power plants use gas to generate electricity, and the shutdown of many French EDF nuclear reactors, in particular due to a corrosion problem. Only 24 of EDF’s 56 nuclear reactors are operating at the moment, in particular due to a corrosion problem, which reduces French electricity production to a historically low level, and mechanically increases prices.

For next December specifically, the megawatt hour of electricity is already trading at more than 1600 euros, an extraordinary level.

(Note that the electricity is already selling for the 1600 euro price, up from 85 euros traditionally.  This is being paid now, in advance, for electricity in the spring, when it is expected to trade higher than 1600 euros per megawatt hour. This is $1,555 per MWH in U.S. Dollars).  The average U.S. monthly MWH charge is somewhere around $70 USD (yellow zones), so imagine if your electric bill was $280, which is four current MWH, marginally typical for an apartment or small house.  That is 4 x 1MWH, or 4MWH.  So in the summer of 2023, expect the French to pay 4 x 1MWH or 4 x 1600 euros or 6400 euros or $6220.16 USD for one months average residential electricity usage.

That’s over $72,000 USD annually just for the light bill.  And its already been paid for, bought wholesale, at that price.  Let that sink in.  The electric companies bought the energy to generate that electricity already, and at the new “stratosphérique” price.  Consumers are still operating under the current contract.  In the new contract, they will not have electricity.  Period. 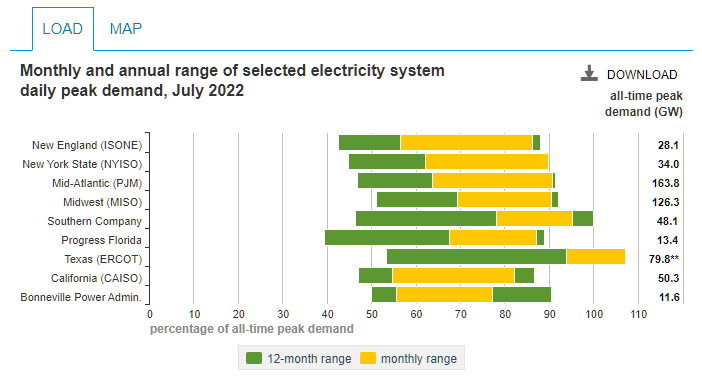 (Back to the French news article…) “Beyond these two countries, all of Europe is struck. The Czech Prime Minister, whose country holds the presidency of the European Union, announced on Friday that his country would convene an emergency meeting.

Although governments want to be publicly reassuring against any risk of power outages in companies that have become accustomed to the comfort of electricity continuously, the markets are telling another story, with operators ready to buy electrons more than ten times more expensive than they did a year ago. European states have spent tens of billions of euros this year to protect their citizens from price increases, but this « shield » is becoming increasingly difficult to finance. The example of the United Kingdom shows it: the regulator announced on Friday that the regulated energy tariffs would increase by 80% from October in the country, and that gas and electricity bills could increase further « considerably » in 2023.

The article is here if you want to translate and finish it.  Not much left.

My point here is that energy is being destroyed on purpose to drive us into poverty.  This is the mission of the WEF and the globalists.  Look, the ultra rich have so money that it has become meaningless to them.  Even they cannot grasp what a net worth of $300,000,000 actually means.  But they have to do something with their lives so they do what comes natural to them – they play god.  Who is going to stop them?
I don’t like thinking about it, but I suspect that Klause Schwab and his friends will want this winter to be especially harsh on the proletariat.  We do have a redeemer and He is definitely in control of every squeak and peep.  As a man who is keenly tuned to injustice it is hard for me to focus less on this tribulation era action.  But I need lots of physical activity to keep my focus.  Otherwise, I’m looking for a nuke under every bush..
Righteousness.  We need to walk in the Way and keep to the strait and narrow path.   Forgive me when I wander into some other way.  Not a “rejecting Jesus” way, but in too much focus on the battle and not enough focus on the war.

I feel you Jerry, I am the same way, I hate injustice also. What is happening to children is really bothering me the most. Other Christians say “God is in control” and put their heads in the sand so to speak. We are the hands and feet of God so I feel we must do something. At the same time I understand He sees so far ahead of me and I have to trust that there will be justice. So frustrating.

It is a real tough position to be in, April. I want to wage war against the beast but His spirit in me spirit disallows it. Time will come though, and I am preparing for that time. Any earthquakes in your area recently? There is a youtube channel called dutchsinse you might find interesting. Incredible earthquake analyst who is very accurate in forecasting quakes.

No earthquakes so far, pretty amazing considering I’m pretty close to the town of San Andreas.

Well, same to you, Miss Kat.