“Then having approached, they laid hands on Yahusha and seized Him. 51And behold, one of those with Yahusha, having stretched out the hand, drew his sword, and having struck the servant of the high priest, cut off his ear.

52Then Yahusha says to him, “Return your sword into its place; for all those having taken the sword, will perish by the sword. 53Or do you think that I am not able to call upon My Father, and He will furnish to Me presently more than twelve legions of angels? 54How then should the Scriptures be fulfilled, that it must be so?” 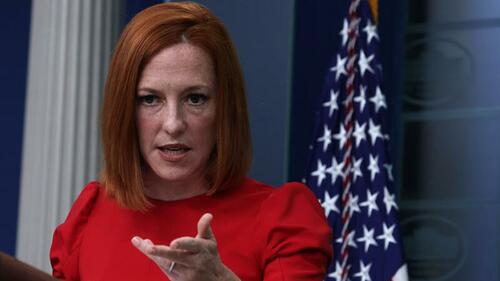 The Wicked Witch, spinning the dark lies of Satan.  She is only the mouth and not the dark heart of the appointed ruler, Joseph Biden.

CNN’s @KaitlanCollins: Biden “was sharply critical of the MAGA crowd…Is that what we should expect to speak his message going into the midterms?”

Psaki doubles down, saying “I would expect you will hear” more of this rhetoric from “him…over the next coming months” pic.twitter.com/B9ecwtQ2qA

“From the fullness of the heart, the mouth speaks”, Yahuah teaches us, and from the contents of Bidens’ heart comes the confession that he wishes to be compared to Satan and not with Yahuah, because Satan is the only “alternative”.  One small sentence made in some insignificant place and time when he was trying to gain power through deception and fraud.  He spoke the truth because the truth will be always be made known.

So why the sword?

Because I want to know if Yahusha was speaking to His followers there in that specific location and time, as He was being arrested.  Was He warning His followers that if they drew their weapons they would be killed by the Roman soldiers?  Rounded up and killed?  Or was He warning us for all time that if we use weapons to defend our freedom would we necessarily die in that conflict?

I think the former.  I think that He was instructing his armed followers to put their weapons away because He HAD to be arrested and because the Temple guards were certainly better fighters than the disciples and that they would all perish, either right there on that hill or later in the day when the government of Israel was pursuing the armed “extremists”.   Yes, Yahusha could protect them but they would still be scattered and mercilessly hunted wherever they went for life.  Their ministry would be crushed before it even got started.

He even clarifies His position by adding that He can protect Himself if protection is what He needs by utilizing the literal legions of angels at His disposal.  He was telling His armed followers that He did not need their swords to defend Himself, that He had to be arrested, to put their swords away because otherwise, they would all be killed.  Remember that they were armed because Yahusha commanded that they arm themselves. Weapons are for killing, not for decoration.

Yahusha needed them to put their weapons away and let Him be arrested quickly so the His disciples could leave in relative peace and get on with the work of spreading the Truth.

So we know and understand the “…Return your sword into its place; for all those having taken the sword, will perish by the sword.”  It does not pertain to you and I fighting for our freedom, but to the disciples so that they would not fight the soldiers who came to arrest Yahusha.  He HAD to be arrested to fulfil prophecy, and they HAD to remain alive to continue the ministry.  Had the disciples continued in their armed defense, absolutely the Roman government of Israel and the Sanhedrin vipers would have mercilessly hunted down every leader in the budding church.  So no armed defense of Yahusha.  He had His own legions of angels, as he made clear.

I point this out to you because there is no doubt any longer that we will have to defend ourselves.  Biden, the “alternative” to Satan (his words, not mine) is preparing to start making arrests with his Ministry of Truth being the dragnet used to identify truthtellers.

“Return your sword into its place; for all those having taken the sword, will perish by the sword. 53Or do you think that I am not able to call upon My Father, and He will furnish to Me presently more than twelve legions of angels? 54How then should the Scriptures be fulfilled, that it must be so?”

Twelve legions of angels –  one legion per disciple.  Point made. He can defend Himself if necessary.  The disciples mission was to start the churches, not to fight the arrestors.

As for the rest of us…