There is a sense of urgency in my belly that just will not go away.  My X is getting passports for herself and my three sons to take them (her) to a location in Mexico this summer.  I informed her of the risk but she plans to go anyway.  Its a bad idea.  My alarm bells are ringing.  I do not know what is driving this state of being within me, but I sense danger.

Look, prepare your mind.  Admit to the possibility that something way beyond your rational expectations can and might take place.

Today I was watching a video at this location and he showed this image: 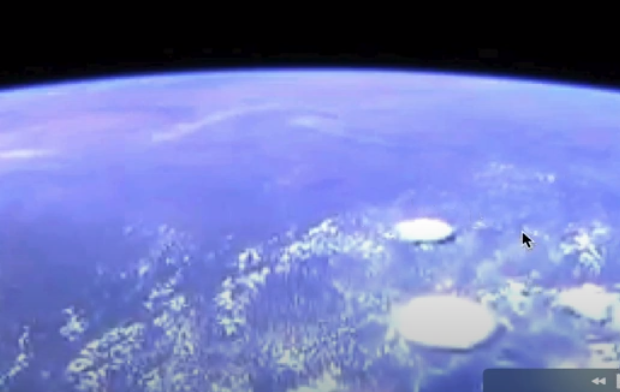 See those two “clouds”?  Perfectly round and flat.  Dude calls them “clouds”, but he has to avoid youtubes censorship.  The biggest one is, he estimates, 100 miles across.

Do I think these are UFO’s?  Yes I do.  They are everywhere these days, and they are preparing for something.

I want to talk about the injections.  Specifically, I want to warn you about them.  If you are close to an injected person, please consider moving away from them.  There will come a point in time where the injections will reach their full potential in some people, and I expect those people to be the arch enemy of Torah keepers and diligent Christians.

Those injections are tools to control human behavior and they serve Satan’s desires.  You want space between you and them.  You want more privacy than you have now.  During the Tribulation, lots of things will overlap one another.  Seal One overlaps Seals Two and Three and probably Four.  Seal Two overlaps Seals Three and Four and Five, probably through to the end.

Seal Four will bring death in the hundreds of millions, and I look for it soon, because Seal Three (famine) is already launched.  You’re going to personally experience what the absence of food feels like.  The upside is we will all loose weight.  Buy some skinny clothes and you’ll look great.  Seriously.

The USA is likely to sign its sovereignty over to the World Health Organization at the end of this month, and we can probably expect to be required to be injected and have the digital documentation of that.  No documentation?  No job.  No shopping.  No banking.  It might look benign enough at first, but the treaty will sprout teeth quickly.  Everything is speeding up.

What we do have is a window of time to prepare NOW.  Sell some stuff and buy food that you can store.  Be quiet about it to everyone.  EVERYONE.  You’ll figure out who you can trust later.  In every tense moment in history, there are good people who surrender to fear and name names to the wicked.  They just get scared and crack up.  And remember Judas.  He betrayed Yahusha with a kiss.

The scriptures teach us that we will be betrayed by people who we love.  Fathers, mothers, sons, daughters, mothers-in-law – all turning family members in to the government, world-wide.  America is no different and America is lost.

There is an increase of US military activity on the east coast.  That’s all I know.  Might be our billions of dollars in cash and equipment being given to the NAZIs over there, or it might be preparations for an attack on the east coast.  Or both.  I think its the Ukraine NAZI support, personally.

Below, at 23 minutes MonkeyWerx gets into details that we are most interested in.  Watch all of it and you will be glad you did.

My concern is the injections and what they are doing to human beings.  I’ve had some nasty hate spat at me lately and one of them is someone I love very much.  It was so uncalled for that I wasn’t even offended, but was very concerned about the wicked speech.  A radical change, and she is an injected one.

Those injections are the tools of satan.  There is something in them that will turn the injected toward violent hatred.  Monitor this expectation among people you know.

If you detect an IP address coming from them, comment here and email me the IP information.  I’ll try to get several and see what we can discern from it.

If you follow Yahuah, do not worry about starving.  He promises that His people will always have bread.  This is not a time for fear, but is a time to pay attention and to do what is necessary to provide for yourself and others.  Don’t be afraid.

Canada is getting into the killing business.

After pleading unsuccessfully for affordable housing to help ease her chronic health condition, a Canadian woman ended her life in February under the country’s assisted-suicide laws. Another woman, suffering from the same condition and also living on disability payments, has nearly reached final approval to end her life.

The two high-profile cases have prompted disbelief and outrage, and shone a light on Canada’s right-to-die laws, which critics argue are being misused to punish the poor and infirm. In late April, the Spectator ran a story with the provocative headline: Why is Canada euthanising the poor?

ANNAPOLIS, Maryland (LifeSiteNews) – Legislation proposed in the Maryland Senate would allow babies to be left to die for as long as the first 28 days after birth, according to analysis from a pro-life attorney.

Senate Bill 669 is also known as the Pregnant Person’s Freedom Act of 2022, but the problems go beyond the use of “person” in place of accurate references to women having babies. Senator William Smith, a Democrat, sponsored the legislation, which will have a hearing on March 15.

“[T]he bill also proposes a revision of the fetal murder/manslaughter statute that would serve to handcuff the investigation of infant deaths unrelated to abortion,” American Center for Law and Justice (ACLJ) attorney Olivia Summers wrote in her analysis.

America deserves to be destroyed.

Speak more about these things. Your voice is personal. Podcasts.

Prayers for your son’s safety. Someone called into a show saying that they went to a graveyard where there were new graves and no one else around and picked up blue tooth. I am not high tech enough to fully understand, but I thought of this when you posted this.

That is very interesting.

Wow, I just went to Press California and they have a story about a guy researching this very thing in a high tech manner. He got 30 blue tooth connects in a graveyard. Check it out before the story disappears.

Go find a cemetery and download the app and try it, April 🙂 Seriously.

He said it is not an app, he just used his android and looked for bluetooth connections. I don’t know the range on these phones, all of our cemeteries are in housing areas. I will try it when I find one more remote.

Well good luck. It’s kind awkward asking people if they have had the shots and “May I run my bluetooth scanner to see if you are transmitting?” 🙂

I believe she has to have your sign off to get passports and take the kids out of the country. My ex tried that about 5 years ago. Mexico too, her new husband is from there. Good guy, but no way. I flatly refused. Mexico is lawless. Me and a friend slipped across the border into Ciudad-Juarez in my Ford escort in Jan 99. Ate lunch, bought some Mexican gas and came back over. Just to say we did.

She wants me to meet her tomorrow at the post office to sign the stuff. She wants to take them to one of those resorts. I forget which one. Not Cancun.