Event 201 was a tabletop exercise, like a game, where 15 high-level players gamed a breakout pandemic virus scenario.  An invitation-only audience of nearly 130 people attended the exercises, and a livestream of the event was available to everyone. Video coverage is available here.

I find it interesting that this WUHAN coronavirus, stolen by the Chinese from Canada in 2013-14 and modified with HIV virus components at the Chinese weapons-grade Level 4 Biological Weapons Lab in Wuhan, China.

And while according to official Chinese data, (“OFFICIAL” = Communist Chinese fantasy numbers) the number of infections has indeed soared in the past two weeks, at just under 25,000 (and roughly 500 deaths), it is a far cry from this dismal prediction, about ten times below that predicted by the epidemiologists. 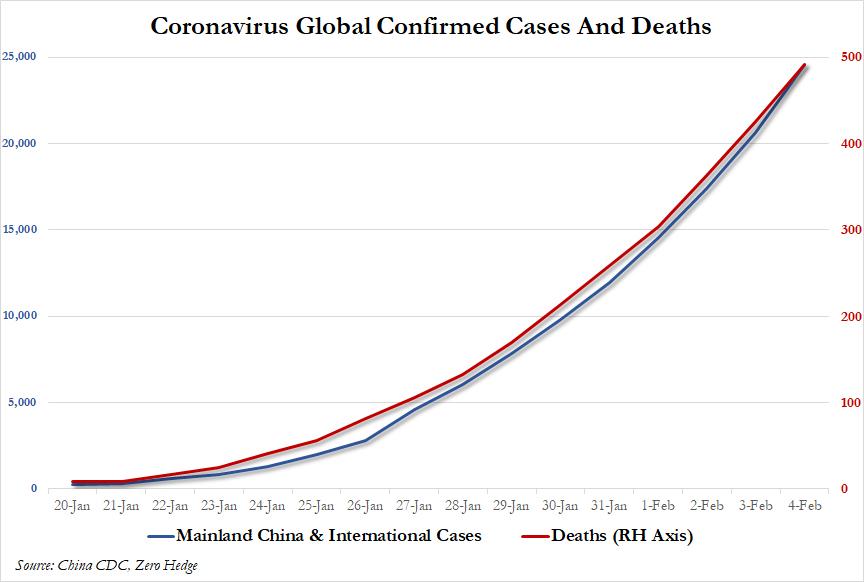 Chinese Communists are lying about the numbers of infections and deaths.

All the crematoriums in WUHAN are running 24 hours per day, seven days per week, burning those dead from coronavirus.  Wuhan is a closed city, all businesses are closed, but the smoke from these cremations fills Wuhan.

The Wall Street Journal (WSJ) itself reported in late January , China was explicitly manipulating the casualty number by listing pneumonia as the cause of death instead of coronavirus. Subsequent reports that Wuhan officials were rushing to cremate coronavirus casualties before they could be counted added to the distrust of “Official” communist data.

The biggest hit to the narrative and China’s officially reported epidemic numbers came overnight, when a slip up in China’s TenCent may have revealed the true extent of the coronavirus epidemic on the mainland. And it is nothing short than terrifying.

As the Taiwan Times reports, over the weekend, “Tencent seems to have inadvertently released what is potentially the actual number of infections and deaths, which were astronomically higher than official figures“, and were far closer to the catastrophic epidemic projections made by Jonathan Read.

Do you follow this?  The TenCent numbers correspond with the 201 Event numbers.

And while the number of cured cases was only 269, well below the official number that day of 300, most ominously, the death toll listed was 24,589, vastly higher than the 300 officially listed that day.

This was not the first time Tencent has done this: as Taiwan Times notes, Chinese netizens have noticed that Tencent has on at least three occasions posted extremely high numbers, only to quickly lower them to government-approved statistics.

This is where it gets even more bizarre: contrary to claiming that this was just a “fat finger” mistyping of data, observant Chinese netizens also noticed that each time the screen with the large numbers appears, it shows a comparison with the previous day’s data which demonstrates a “reasonable” incremental increase, much like comparisons of official numbers.

This led many in the mainland to speculate that Tencent has two sets of data, the real data and “processed” data.

In short, two camps have emerged: one, the more optimistic, speculates that a coding problem could be causing the real “internal” data to accidentally appear. The other, far more pessimistically inclined, believes that someone behind the scenes is trying to leak the real numbers, as “the “internal” data held by Beijing may not reflect the true extent of the epidemic.”

Indeed, as repeatedly pointed out here and according to multiple sources in Wuhan, many coronavirus patients are unable to receive treatment and die outside of hospitals. Furthermore, a severe shortage of test kits also leads to a lower number of diagnosed cases of infection and death. In addition, there have been many reports of doctors being ordered to list other forms of death instead of coronavirus to keep the death toll artificially low.

What is the truth?

We leave it up to readers, but keep this in mind: on Jan 29, Zeng Guang, the chief scientist of epidemiology at China’s CDC, made a rare candid admission about why Chinese officials cannot tell people the truth in an interview with the state-run tabloid Global Times: “The officials need to think about the political angle and social stability in order to keep their positions.”

And then, on Monday, none other than China Xi’s called on all officials to quickly work together to contain the Coronavirus at a rare meeting of top leaders, saying the outcome would “directly impact social stability in the country.”

Well, if China is mostly concerned about social stability – as it should be for a nation of 1.4 billion – it is easy to comprehend why the entire political apparatus in China would be geared to presenting numbers which seem somewhat credible – in light of the barrage of videos of people dying on the street – but not so terrifying as to cause a countrywide panic.

Then again, if China indeed had over 154,000 cases and almost 25,000 deaths as of 5 days ago, then no attempts to mask the full extent and true severity of the pandemic have any hope of “containing” the truth.