I’ve been told all my life, from about age six, that the “Russians” were bad and America was good.  But I see Russians fighting the satanic blasphemy that America is.  I see Russians dying to break the stranglehold of a child-butchering transvestite-building U.S.A.  The pro-homo west, the fraudulently empowered anti-christ “progressives” who list as terrorists people like me, who support the Constitution, own weapons, read the Bible – we are identified as the enemy of America.

We have in common with Russia an abiding hatred for western Satanism.  We hate the lies and deception of the West.  We hate the blatant election fraud.  We hate the white trash of Elizabeth Cheney and her kangaroo court J-6 “commission”.  We hate the illegitimate imprisonment of the J-6 tourists who went into the congressional building after the police opened the gates and invited them in.  We hate the political hitmen that the F.B.I. has become, arresting decent Americans in the dark for political views opposing the trash of liberal government.

Russia is a long way from liberty, but Putin is a far better man fighting for far more noble things than ANY U.S. politician at any level.  He is the better man.  Where is the vaunted Trump when it comes to the satanism in American political theater?  Where is Trump when children are being butchered to have their sex organs changed?  When these kids are pumped full of chemistry to break their natural biological sex?  Why aren’t their parents being imprisoned, alongside the doctors who wield the scalpel and the needle?

Where is the battlefield?  Where are the fighters?  Where is the intensity, the seething anger directed against these monsters who are destroying our children?  Why are we not extracting the price for these multiple atrocities ongoing in America?

If any “politician” desires to lead, he or she better show up with a very sharp sword and be utterly determined to use it.  They already call us terrorists, these perverted freaks who took the knee to Satan.

Biden kneels to Satan in a church… 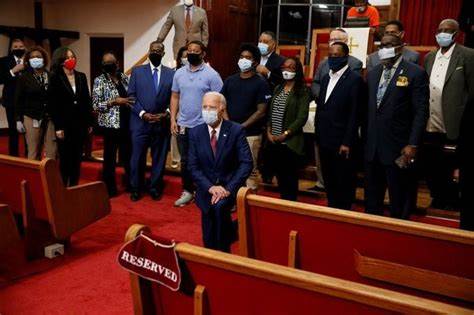 As Chuck Nadler says in the tweet below, there is no place for God in this congress.

WATCH THIS – @RepGregSteube quoting scripture on Senate Floor in opposition to #EqualityAct. @HouseDemocrats object, then @RepJerryNadler says, “God’s will, is no concern of this Congress. @EWTNNewsNightly pic.twitter.com/fGvJzKHRAs

And no place for God in Obama’s administration.  He was sworn in on what is said to be a Koran, or Quran.

He’s consistent about it, too… That’s “taking the knee” to a higher level, I suppose.  And now the sick depravity of his homosexual agenda is motivating the largest nuclear arsenal on earth to publicly announce its intent to “destroy the satanic west.” So Yahuah is going to let the anti-Christ’s who rule the streets of America get their wish.

Breitbart calls Putin’s speech a “rant”.  But Breitbart is a very cowardly, tepid, timid “news site”.  I can barely stomach their weak coverage.  Here is a short excerpt from the speech Vladimir Putin, President of Russia, gave.  Read it.  I put the entire speech here.

Let’s answer some very simple questions for ourselves. Now I would like to return to what I said and want to address also all citizens of the country – not just the colleagues that are in the hall – but all citizens of Russia: do we want to have here, in our country, in Russia, “parent number one, parent number two and parent number three” (they have completely lost it!) instead of mother and father? Do we want our schools to impose on our children, from their earliest days in school, perversions that lead to degradation and extinction? Do we want to drum into their heads the ideas that certain other genders exist along with women and men and to offer them gender reassignment surgery? Is that what we want for our country and our children? This is all unacceptable to us. We have a different future of our own.

Let me repeat that the dictatorship of the Western elites targets all societies, including the citizens of Western countries themselves. This is a challenge to all. This complete renunciation of what it means to be human, the overthrow of faith and traditional values, and the suppression of freedom are coming to resemble a “religion in reverse” – pure Satanism. Exposing false messiahs, Jesus Christ said in the Sermon on the Mount: “By their fruits ye shall know them.” These poisonous fruits are already obvious to people, and not only in our country but also in all countries, including many people in the West itself.

They do not give a damn about the natural right of billions of people, the majority of humanity, to freedom and justice, the right to determine their own future. They have already moved on to the radical denial of moral, religious, and family values.

This is only a small piece of Putin’s speech, which is a speech I have never heard from Russia, and one which outlines the countless crimes the United States government and its military/industrial/banker partners will howl and scream about.  Putin is obviously aware of the rampant criminality and outright fraud in American government.  The BLM garbage that sought to glorify a dead drug addict who killed himself on fentanyl, glorifying him because of his race, in spite of his gutter character.

I’m just not willing to go along to get along any more.  I want to call a spade a spade.  I want to stand nose to nose with my enemies and if I am defeated, at least I will be in the fight.  Cowardice and patiently waiting for Satan to establish his complete dominion over all life on earth is just not on my bucket list.

Like King David, a “man after Yahuah’s own heart”, I intend to take my words to a higher level.  I hate the current and recent past government of the United States.  I hate the lying bureaucrats, the undercover Freemasons, the anti-Christs.  I hate the pathetic “leaders” of the so-called “conservative movement”.  I hate the Satanism of the left and so help me God, if its war then its war.  Putin said in his speech that America “relies on the fist” to win its objectives, destroying every enemy everywhere it detects opposition to its satanic policies.

Why did Washington D.C. do that?  Because we will not take the knee.  We won’t swear on a non-Bible.  We will not surrender to the homosexual filth, the pedophilia, the tranny deception.

That’s my plan for now.  More later, count on that.  What are you going to do?  I’m asking.  WHAT ARE YOU GOING TO DO?  And I want an answer.  I want to hear from you.  I want a plan from you, and I want it in the comment section.  Please do not send me a secret email about your plan.  If you cannot stand up and publicly declare that you are going to FIGHT the enemy who already is at war against you, then you intend to do nothing.

You, like me, have a keyboard.  You have email addresses.  You can write letters and send them to your entire address book.  If someone says “please stop”, take their address from your computer and be done with them.  Be strong.  Push ahead.  This is an information war and we have good information.  I want all of you to start writing letters TODAY and I want you to write a new letter every day, even if its one sentence with one link to a bad thing or a good thing, buy you have to wake your friends up.  Do not be intimidated or feel “rude”.  The lives of millions of children is in the balance.  We have to fight for freedom for them, and we absolutely must tear down the Satanists in power all across America.

If you see that there are no comments of legitimate plans of action by the “righteous” who declare their enmity to Satan but staple their lips closed when it is time to speak, then you will fully understand why Satan has gained control over America – the fearful, whom Yahuah will cast into hell, hide.

To say nothing is to say everything.

I’m spreading the word! People think I’m crazy. They don’t know what’s going on because life seems back to normal for them, and many are fully vaccinated. They dont respond or say they feel fine. I post on FB the sudden deaths. As many as I can. I talk to family and friends. Denial. Don’t pay attention. Some do!

Putin has given an Excellent Speech & as always right in point. He has really got the agenda of the West & Elites down to a fine point. No punches pulled. This is exactly what the West want to do, is to take Russia down & break it up & then rape & strip it of ALL its resources as they have with Africa & Far Eastern counties. This is why they keep pushing the ‘Russia is the Baddie’ card. But now their plan has been exposed it will be more difficult for them to get away with that. And maybe in the future those other countries they’ve stripped will get their recommence for their people. This has been allowed to continue for FAR TOO LONG.

”What are you going to do? I’m asking.” I have failed you, Jerry. I know Yahuah knows as you do indeed. My plan is as follows: -being truthful until I am breathing truth -courageously speak like I act, act like I speak so that I am able to defend myself against my own lies righteously through Truth -no fighting my cowardice anymore, instead heartfelt and strong surrender to our living Word, our Lord Yahu’sha -earnestly accepting my sins through using my free will and embracing everything which makes me sick on the inside, while letting everything loose making me sick on the outside (e.g. frantically scouring biblical scripture to ease my OCD=obsessive-compulsive disorder 😉 ) Besides, I have to acknowledge keenly that my fight is a spiritual one, satan lurking inside my OWN chest cavity. No need battling flesh and blood. I pray for you and your two sons, dear Jerry. Please forgive me, for I have fallen afar of your kind benevolence toward me. If you want to fight anyone or hate someone, do these things onto… Read more »

lol. Andreas, you take things far too seriously. Satan is not lurking in you. When Paul claims that sin resides in our flesh, it does not mean that we are possessed, but rather that we desire to be our own god. Surrender to Yahuah is difficult. Continual surrender is more difficult. We are made in His image, we have Him inside us. And He is GOD, therefore we want to be god, too. So did the fallen one we call “Satan”. He wanted to become god and he is busy on that very task. If I have to fight, I will fight as my Lord wills it, and with great force against the enemies of Truth.

As a 70 year old grandmother , I am limited in many ways. That does not mean I won’t defend my family, my fellow Christians. A tongue can be sharper than a sword. Fifty years ago, I would say that Putin’s speech was spoken by an American president. This country needs to wake up!! Put on your armor of God!

Welcome To The War wpDiscuz
7
0
Would love your thoughts, please comment.x
()
x
| Reply