Wanna live longer?  Well, you can.

Researchers at Stanford University and the Buck Institute announce the remarkable discovery of a biological clock in human blood that can determine your “inflammatory age” (iAge) which equates with longevity.  iAge can now be used to track risk to develop chronic age-related frailty.  Anticipate blood test kits to be available soon.

The team of investigators identified CXCL9, an inflammatory protein that biologists call chemokines, as the strongest contributor to iAge.  CXCL9 is called into action when white blood cells are required to respond to infection.

Epigenetic “silencing” of CXCL9 reverses chronic inflammation.  In fact, aging has been redefined as “inflammaging.”  Gene silencing is when gene protein-making is halted.  The term “inflammaging” was first coined in 2000 as the hallmark sign of aging.

CXCL9 not only activates genes involved in inflammation but also induces cellular senescence, blood vessel aging, and adverse changes in the size, mass and function of the heart.  Cellular senescence is when living cells cease division and renewal.

CXCL9 Protein Determines “How Far Along A Person Is
In Their Inexorable March To The Grave.”

Researchers say the CXCL9 protein helps determine “how far along a person is in their inexorable march to the grave.”

The age of your immune system can now be measured

On average, centenarians have an immune system that is 40 years younger than what is considered normal.  “We have an outlier, a super-healthy 105-year old man who lives in Italy who has the immune system of a 25-year old,” said researchers.

Researchers in the field of aging now say they need to pay more attention to the immune system with advancing age, given that almost every malady of aging involves inflammation.

The discovery was made after blood analysis of 1,001 individuals and is published in the journal NATURE AGING.

CXCL9 was first described as part of a family of “chemokines” in the 1990s.  CXCL9 and its family of inflammatory proteins activate lymphocytes, white blood cells such as natural killer cells, T-cells (thymus cells), and B-cells (bone marrow cells) that are mainly found in lymph fluid that bathe tissues throughout the human body.

That is because National Institutes of Health (NIH) researchers reported in 2015 that the red wine molecule resveratrol demonstrably inhibits CXCL9 and other CX family inflammatory proteins.

The NIH research was conducted as part of an investigation as to what causes inflammation in the human eye in the latter years of life.  Inflammation is a primary component of macular degeneration, a progressive eye disease that results in the loss of central vision.

Resveratrol inhibits the CX-family inflammatory proteins via its ability to limit activation of NF-KappaB, an internal regulator of the innate immune system that initially responds to infection and inflammation.  NFKappaB is commonly measured in studies of aging and longevity, more so because of its control over the Sirtuin1 survival gene.

The Sirtuin1 survival gene is activated by starvation and molecularly mimicked by the red wine molecule resveratrol.

NIH researchers report resveratrol inhibits pro-inflammatory proteins CXCL9, CXCL 2, CXCL5 and CXCL11 in human retinal cells.  The inhibitor effect of resveratrol upon CXCL9 can only be said to be strikingly powerful.  The NIH report was published in the journal CYTOKINE in 2015.  Examine the graphic below. 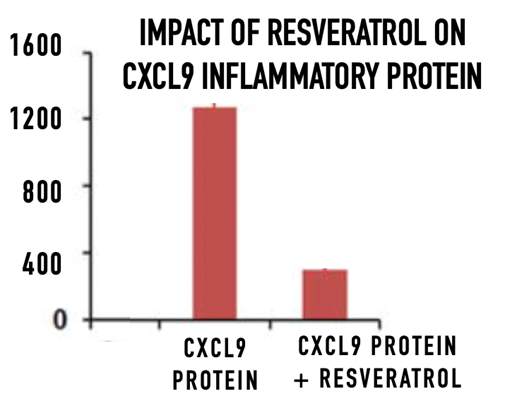 CXCL9 and the other CX family proteins should not be completely abolished as they are part of the human immune response.  It is their over-reactivity that needs to be addressed.  Modern medicine usually designs monoclonal antibodies to completely block inflammation and abnormal blood vessels that invade an oxygen-starved retina, at the expense of the immune system.  Complete inhibition compromises wound healing.  Monoclonal antibodies are injected into patients with macular degeneration on a regular basis but have this drawback.

Resveratrol in action; just any resveratrol pill won’t do

None of this should be surprising.  Researchers at the Veterans Hospital in North Chicago utilized a resveratrol-based nutraceutical among 80-plus-year old patients whose were legally blind (20/200 vision or worse; have to stand 20 feet away from an eye chart to see what a perfectly-sighted individual can see from 200 feet away), and it restored functional vision without fail.

While resveratrol-based nutraceuticals have been available since 2004 they are not widely used, not even in the top-100 herbal supplements.  Among those who already include resveratrol in their daily health regimens, it will take years before it is suddenly realized it may produce a new generation of super-healthy centenarians.  Resveratrol dietary supplements avoid the problem of inebriation that accompanies wine drinking and provide a sure dose of resveratrol.  The medical community has been quick to brand resveratrol pills as “not bioavailable” and of useless value.

It is timely that resveratrol’s ability to boost immunity comes during the COVID-19 pandemic that is striking the older-age population severely.  Resveratrol blocks all of the pathways involved in COVID-19 viral infection.

Furthermore, another nutrient, the trace mineral zinc has been proposed to prevent the age-related decline in the immune system.  Zinc has been shown to reduce the percent of senior adults who died from 52% to 10% and only 10% of zinc-fortified seniors were hospitalized versus 22% for those who did not supplement their diet with zinc.

Don’t wait for Medicare to pay for resveratrol pills

The problem is, aging is not classified as a disease that has an insurance billing code attached to it.  There is no financial incentive for doctors and hospitals to direct people how to live longer and healthier.  It is a disease-care system.  If aging is delayed 20-40 years, the demand for doctoring will decline.  Furthermore, longevity butts heads with a healthcare system that can no longer afford to care for senior Americans.  The Medicare Trust Fund is virtually empty except for new contributions from the paychecks of younger workers, many whom are now unemployed.

So, when it comes to longevity, Americans adults will have to assess the best available evidence.  Mountains of research say it is now possible to live 120 healthy years, but the decision to do that will have to be your own, not your doctor’s, and no, Medicare isn’t going to pay for anti-aging pills.

Most red wine has toxic additives, the grapes are sprayed while growing, then chemicals in the making process – you would need to access organic red wine. I used to work with an Italian man who made his own red wine from grapes that he grew without any chemicals…and it tasted amazing!

One of the biggest inflammatory foods in todays diet is wheat! Then processed foods etc. Nearly all those with disease consume both.

And, we need to remember, that the convid is the influenza repackaged. Its all a big con job by the master magician to bring in the mark.
Stay strong

Yes, all true. Taking the Resveratrol (sp?) in capsule form is the way to go.