We hear things and we read things and we investigate things and eventually the truth comes out.  La Palma, the volcano/earthquake seismic zone, just opened an additional vent.  There is some kind of persistent pressure showing up under La Palma.  And there is this odd pattern… 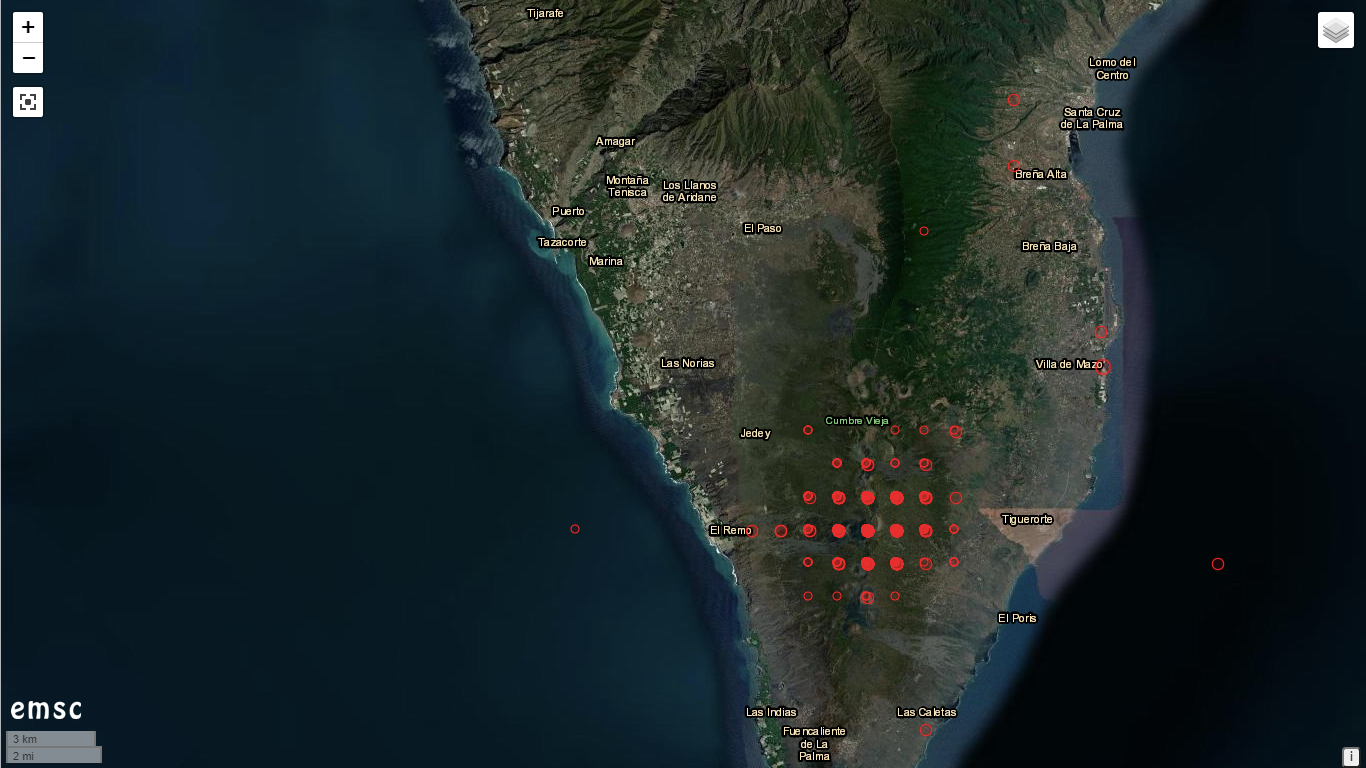 Maybe there is some truth to the persistent rumor that La Palma is being irradiated with something that creates subsurface pressure, with the intent of creating perhaps a tsunami.  Who knows?  But I was able to use the software linked below to generate this image myself, and all other images I have seen of a few thousand earthquakes in the last two weeks have been what appeared to be random locations, as one would expect.

This is interesting and bears watching.  My first impulse is that the grid pattern appears simply because the software creating these maps doesn’t know exactly where to place the icons, only that there needs to be icons in that location so it creates them in a linear pattern.

But that is as much guess-work as guessing that the pattern is legit and that Dr. Strangelove is planning to destroy the East coast of the USA.  Of course many prophets have said for many decades that both coasts of the USA will be destroyed by tsunamis.  If the grid is legit, and the more I study it the more legitimate it appears to me, then someone really is irradiating specific points of La Palma to weaken the foundation.

I love your posts because they always deliver thought and discussion points.

I am going to offer up something to chew on and discuss just cause its fun…nothing more nothing less.

Examples, can earthquakes really be caused by human intervention? Or can humans really control the weather? Can we really cure cancer?

I know we live in a matrix, but “nature” or “natural processes” have so much unfathomable power in potential and kinetic energy wave patterns within themselves that their mere existences point to a creative power outside the world we know.

I have seen the destructive power of “simple” water flowing in the form of a kinetic flash flooding event. I have seen and witnessed volcanic ash destroying a plane’s engine to repair mean replace the entire engine – the smallest thing can do so much damage. Just like my tongue can.

To be completely transparent to go along with my “something” thought. I really believe strongly based on theory and evidence I have studied that our entire solar system is experiencing massive natural physical changes via a cyclic process of creation and destruction, creation and destruction and creation and destruction, over and over – as if Yahuah orients this consuming cycle. Like an oscillation in the water when a stone hits it with force thrown by the little boy at the pond’s side. A ripple effect occurs as a wave and then it dissipates, and calm returns until the next curious piper throws a stone in the pond again.

Plus our solar system is one big electrical charged system with lots of batteries and engines – things that store and spend that energy to find balance. The positive and the negative. The ying and the yang. The chaos and the order. All in conflict with one another all of the time.

So, to get back to your initial point. Radiation, irradiation – absolutely. But by humans, I highly doubt our ability to produce such power. However, Yahuah’s power or Satan’s mions – I have no doubt they can make things happen we can’t. Those darn, extraterrestrials.

We are but ants easily squish-able. A Dave Mathews Band kinda of song comes to my mind. Ants marching. https://youtu.be/MNgJBIx-hK8

Fun isn’t it? Love the discussion. Thank you, Jerry for posting.

David, what you postulate is certainly possible. There is plenty of evidence that some kind of advanced technology existed long ago. Machu Picu is a great place to start. The rock walls there are unique and we cannot duplicate their construction. In face, two facing walls there have the same pattern, which points to CAD technology. Plus, the construction method is fascinating. I have a book that you might be interested in. It discusses many things which point to exactly what you are discussing, including some remarkable information on an advanced culture in what is now the Amazon jungle. It seems there was a thriving culture there at one time that developed a unique type of soil that grew anything and in abundance. And the elongated skulls of a forgotten people – who were they? The structures under the sea around the Bahamas. The death of Earnest Hemingway in San Antonio (Dominican Republic, I think.) It looks more like an assassination than a suicide. His son was in the CIA if I remember correctly, and “something” had been discovered near the Bahamas (or Bimini, I forget.)

And the whole “new heaven and a new earth” – we will see soon.

They are causing the “climate change” themselves. Just like the “typhoon” that just hit here in California. They want to say “see look at all the weird weather and volcanic eruptions, we need carbon taxes!” It is all a part of their dark winter plan.

Yes. The US military has a stated goal of controlling the weather. I’m pretty sure that the flooding in China was man-made. The Three Gorges dam was the target and they almost broke it.