Adam and Eve were tempted by Satan in the garden.  Both rejected Yahuah and brought sin into the world of humans.  Prior to that, sin only existed among the fallen ones, because they disobeyed Yahuah first.  Had Adam been of the Natsarim, his decisions would have been different.

If they did, a battlefield tactic would have been to surround the garden with “booby traps”, perhaps some technology in the soil to corrupt mankind should mankind ever till to the soil outside the garden.  But this is only intellectual conjecture at this point.  I want to focus on Adam, Eve, the Nacash and Yahuah.

https://biblehub.com › hebrew › 5175.htm
I. נָחָשׁ noun masculine Genesis 3:1 serpent (Late Hebrew id.; Arabic serpent, viper (Lane 406anything hunted) is compare by Lag M, i, 230; BN 50, 188 Ba Es 48, but improbable; Arabic see below [נָחַשׁ below; on formation compare Lag BN 50); — absolute ׳נ Amos 5:19 +; construct נְחַשׁ Numbers 21:9 2t.; plural נְחָשִׁים Numbers 21:6; Jeremiah 8:17; —
The serpent tempted Eve by stating that “surely she would not die”.  A lie, and Eve had never heard a lie before.  Neither had Adam.  They had only heard Truth.  Every word ever spoken had been truth, both from Yahuah and to one another.  They were like little children in this regard.
Adam heard the nacash speak to Eve, and Eve ate from the tree.  She did not die.  Adam noted this.  He should have rebuked the serpent when the serpent lied, but Adam did not know what a lie was.  He observed.
When Eve did not fall dead, Adam also ate.  Since he did not rebuke the serpent prior to Eve eating from the tree, he should have waited until the cool of the day when he and Yahuah walked in the garden together to talk.  Adam could have asked Yahuah about the serpent, Eve and the tree.  Yahuah would have instructed Adam as to the serpents lie, and explained what a lie was.
Adam did not wait.  He did not ask for clarification.  He ate from the tree and experienced whatever Eve experienced.  She experienced something, certainly.  Her eyes were opened to rebellion.  She knew more than Adam and Adam had to take that step, too.
Not from pride, as that would have been a sin the preceded eating from the tree.  He just wanted to experience what Eve experienced as her eyes were opened to see what disobedience offered.
A Natsarim would have rebuked the serpent from the beginning.  Natsarim are guardians of Truth.  We stand for Truth no matter what.  We seek truth and we live according to it.  A Natsarim would have warned Eve to obey Yahuah no matter what, and then the Natsarim would have asked Yahuah about this nacash when he walked with Yahuah in the cool of the day.
We stand for the Truth and we ask questions when we do not know.   We seek the wise counsel of one who does know, and if the answer is slow in coming, we are patient.  We wait.  There is no need to hurry.
Note – Cain was not the offspring of Satan, as some teach.  Cain was no giant, as were the eventual offspring of the fallen ones and human women. Cain was simply the first-born of sin, and he bore the fruit of that ignoble position.
When you are tempted by some glittering snake, turn away.  Remember the promises of Yahuah to all who keep His commands.   Our Way is difficult.  The gate is tight and the path is narrow.  There is no wandering from side to side.  Being narrow, we must directly encounter snares and not go around them.  Direct encounter means we must deal with temptation as true guardians of the Truth.  Every time.

I have to share this with you before closing. 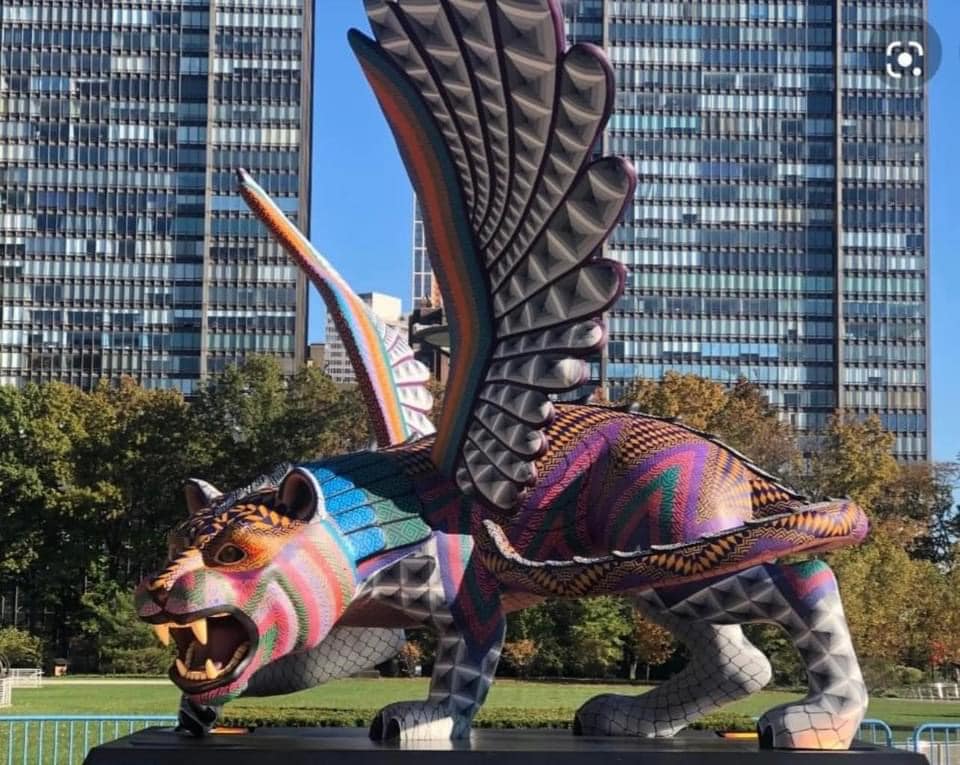 Just erected at the United Nations (U.N.)- teeth like a lion, wings like an eagle, the tail of a serpent and feet like a bear.  “The Guardian of International Peace and Security” they call it.  World peace, guaranteed by the organization that erected this thing.

Peace and safety.  When they proclaim it, sudden destruction will come upon them.

10 thoughts on “Had Natsarim Been Tempted In The Garden”