Let’s begin with demented old Joe Biden, shall we?  Joseph Biden is obviously suffering from dementia.  His mind is quite soft.  He is an old man who plainly cannot function without substantial help.  I have known for some time that Biden’s deteriorating mental condition makes him perfect for the powers seeking to subjugate the United States.  Here’s why.

Biden will be ruled by a committee.  His “advisors” will be his handlers, and his handlers will be chosen based on their expertise and commitment to instituting a world governor.  A world ruler.

These “advisors” will manage a process that is planned to rip the United States to shreds, to break the will of the American people and to intimidate us into total submission to the New World Order.

Biden will be the friendly face of the lesser satans who serve the fallen one, the Prince of this world, the satan of mankind and of Yahuah.

Yet one thing gnawed at me, and that was this: How could Biden beat Trump?

In spite of Satans best efforts, from the Russian Collusion hoax to the fraudulent impeachment effort to the current and failed corona virus deception, nothing is actually working for them.  Sure, they will milk this corona virus thing for all it is worth, but most people know that it is essentially a “nothing burger”.   For example, today is Sunday, July 26th, and just Friday did I learn that I knew someone who knew someone being treated for Corona virus.  One person after six months of media hysteria, 40 million jobs lost, and insane little mayors making themselves petite kings using the stampeded lemmings in their local populations as the peer pressure.

People can be so disgustingly weak.  No wonder the satan gains power.  No wonder.

But the Democrats stuck with Biden, which seems like a suicidal choice if ever there was one.  The man is mentally rotting, and getting worse all the time.  Why risk the election?

And then I watched Jerry Toney’s video last night.

Jerry Toney is an old school Internet preacher.  He is a former biker who lived a hard life, got saved and abides by Torah.  Although I almost never watch his videos, I maintain my subscription to him because he is a voice of Truth.  He understands scripture fairly well and he stands for Yahuah properly.  I respect him and look forward to meeting him someday.

Last night I watched his newest video.  I usually don’t even look to see what he published, as I have 260+ subscriptions  to scroll through and limited time.  I watch maybe four of his vids per year.  Last night was the only Toney video I have seen this calendar year.

I have watched the video posted below three times, and I have it open in another tab now so that I may watch it again in a few minutes.  Jerry Toney, you see, had a dream.

In his dream, Obama and some others have a stack of photos, and Obama says the photos must be released “before the videos”.  According to Jerry, the photos are “vile”, and he says that in his spirit he knows that the photos and videos are of Donald Trump.

Then I understood why the Democrats are promoting Biden.  It is because Biden is a complete idiot.  He is helpless and unable to manage even himself, much less the United States.  The Vice-Presidential pick will be key for the Dems.  Remember how Dick Cheney managed George Bush so he could personally loot Iraq?  The Democratic selection for vice-president will be a similar choice.  Someone to take over if Biden drops dead or is removed from office.  Whoever it is, it will be someone the American people would never elect to run the country.

But then the main question: How to get Biden elected?

Everyone knows that Biden is a broken-brained man.  He cannot win unless something huge pushes voters toward Biden and away from Donald Trump.  Trump will win by a landslide unless something drastic is done.  Obama himself might be arrested in a Trump 2nd term, and Obama knows full well that Trump will come for him.

So in their collective desperation, I expect in September or October to see the magical release of dozens of Epstein-related photos and videos starring Donald J. Trump.  The images will somehow be tied to the Ghislaine Maxwell case, and they will be timed to have maximum impact on the election.

Why On Earth Did Ghislaine Maxwell Come Back To The USA? 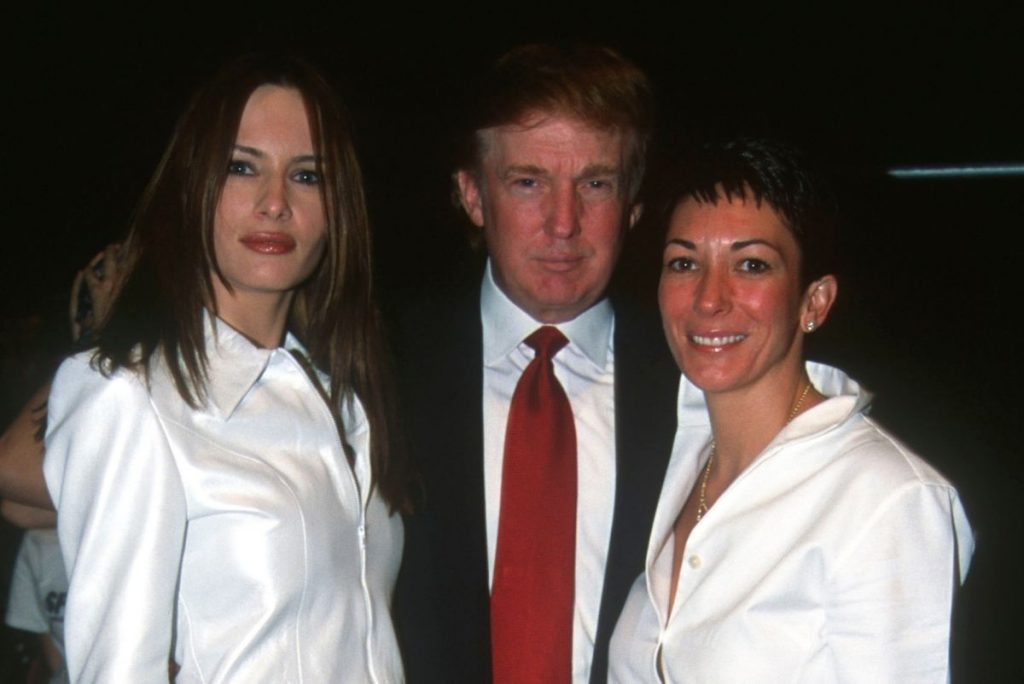 Someone somewhere made a deal with Ghislaine, you see.  She lived safe and free in France, because France does not have an extradition treaty with the United States.  She was free, lived like a queen and had no fear of being arrested.  Her presence in France as recently as last month is documented in three different publications from the United States (Sun and Post) and England (Daily Mail): The SUN, the Daily Mail and the NY Post.

So what was she doing in the United States, where she was literally a hunted animal?

I suspect that she was threatened in France; that someone from whomever wants to rule the world went to her and told her that the could either die in France or be “captured” hiding in the USA and testify against Trump.  If she testified against Trump, she would eventually be freed and keep her money.

They would tell her that plenty of powerful people already wanted her dead, so if she “suicided herself” then case closed and everyone who feared her would be happy.  She would be told that someone else, an unknown random third party, might even kill her, and that many people wanted her dead.

Alternatively, the visitor would tell her that if she helped frame Trump, she would be kept safe and would eventually be a completely free and wealthy woman, complete with mass media support to rehabilitate her reputation.

So she choose to turn snitch and help frame Mr. Trump.  A script was written and rehearsed whereby someone bought a house for her in New Hampshire in December 2019 (Seven months ago and six months before Ghislaine was “arrested”.), where she was arrested after a reasonable amount of time had gone by.

They finally found her in a four-bedroom, 4,365-square-foot home on a 156-acre wooded lot that she “acquired through an all-cash purchase in December 2019 (through a carefully anonymized LLC) in Bradford, New Hampshire, an area to which she has no other known connections.” The home is reportedly called Tuckedaway, and an online listing describes it as “an amazing retreat for the nature lover who also wants total privacy.” The sale price was $1,070,750.

Is Ghislaine Maxwell in the USA to help take down the President in another DNC/Russian Collusion/Impeachment/Coronavirus/Lockdown/
Epstein attempt?

The fake Republican-oriented Lincoln Project is already beating the drum, creating the narrative that Trump is a pedophile and that Maxwell has the proof.

It shows Mr Trump berating a number of female journalists – with the ad saying at one point, “This is how Donald Trump speaks to accomplished women” – before flashing to a recent White House press briefing in which the president spoke about his relationship with Ms Maxwell over the years.

“I just wish her well, frankly,” Mr Trump is heard saying in the briefing.

A woman narrating the advertisement then says: “Just what does Maxwell have on Donald Trump? Why does he demean other women but treat the head of an alleged sex slave ring with respect? Does Donald Trump want Maxwell to keep quiet? America needs to know.”

The Lincoln Project, run by tax cheats and grifters,  is also a major criminal enterprise and was just busted by the FBI.  So their character is perfect for the setup of Donald Trump and the false narrative. Rick Wilson, a Lincoln Project co-founder, is a registered RUSSIAN AGENT.

The photos that Mr. Toney dreamed about are either real photos, or they are fake photos.  Same holds true for the videos.  If any alleged compromising photos of Trump spring up, and/or any compromising videos suddenly follow the release of any images, I think we can be sure that they are fake and released just in time to drive people away from Trump come election day, remove him from office and enable the globalists to rip him to pieces after he loses power.

Obama’s leading presence in Toney’s dream indicates that it is indeed fraud, because Obama would not have access to any Maxwell pedo images of any kind in reality.  But because Trump will go after Obama in his 2nd term, Obama does have motivation to frame Trump by releasing fake pedophile images through some third party. Obama would have significant and talented help from elements within the CIA and other government and private individuals.

I think this is what Toney’s dream is about.  We will see in a month or so.