A major free speech case is brewing in Finland after Member of Parliament (and former Interior Minister) Päivi Räsänen was criminally charged after tweeting a quotation from the Bible in opposition to her church’s sponsorship of an LGBT pride event.
Räsänen, 61, is reportedly facing up to two years in prison for exercising her rights of free speech and freedom of religion.

On June 17, 2019, Räsänen asked in a Twitter post how the sponsorship was compatible with the Bible, linking to a photograph of a biblical passage, Romans 1:24-27, on Instagram. She also posted the text and image on Facebook. However, she also insisted that “The purpose [of] my tweet was in no way to insult sexual minorities. My criticism was aimed at the leadership of the church.” 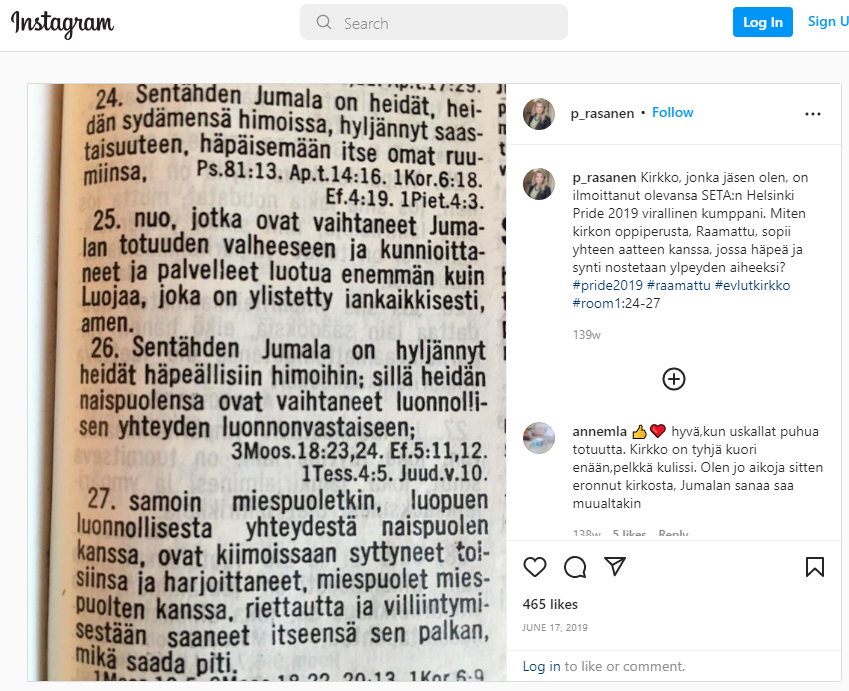 Rom 1:24  Wherefore Elohiym also gave them up to uncleanness through the lusts of their own hearts, to dishonor their own bodies between themselves:
Rom 1:25  Who changed the Truth of Elohiym into a lie, and worshipped and served the creature more than the Creator, who is blessed forever. Amein.
Rom 1:26  For this cause Elohiym gave them up unto vile affections: for even their women did change the natural use into that which is against nature:
Rom 1:27  And likewise also the men, leaving the natural use of the woman, burned in their lust one toward another; men with men working that which is unseemly, and receiving in themselves that recompence of their error which was meet.

The Prosecutor General charged Räsänen with incitement against a minority group, arguing that her statements were “likely to cause intolerance, contempt, and hatred towards homosexuals.”

Räsänen has stood firm on her free speech rights “I cannot accept that voicing my religious beliefs could mean imprisonment. I do not consider myself guilty of threatening, slandering, or insulting anyone. My statements were all based on the Bible’s teachings on marriage and sexuality.”

“I will defend my right to confess my faith, so that no one else would be deprived of their right to freedom of religion and speech. I hold on to the view that my expressions are legal and they should not be censored. I will not back down from my views. I will not be intimidated into hiding my faith. The more Christians keep silent on controversial themes, the narrower the space for freedom of speech gets.”

We have previously discussed the alarming rollback on free speech rights in the West, particularly in France (here and here and here and here and here and here and here). Much of this trend is tied to the expansion of hate speech and non-discrimination laws. I wrote earlier about the prosecution of famous actress Brigitte Bardot for saying in 2006 that Muslims were ruining France in a letter to then-Interior Minister (and later President) Nicolas Sarkozy. Bardot, an animal rights activist, has been repeatedly hit with such criminal complaints for criticizing different groups. Now she was later fined for calling the the inhabitants of La Reunion “savages” for their continued sacrificing of animals in religious rituals.

These cases include ministers and others who have been prosecuted for calling homosexuality a sin.

The Finland case is an attack on core free speech rights. I happen to disagree with her views on homosexuality but that is immaterial. Many of us in the free speech community view this as a human right to be able to express one’s values and beliefs without threat of arrest. In the name of equity, Finland is sacrificing liberty. In the name of tolerance, Finland is declaring intolerance for opposing views. No such tradeoff is necessary. Political opponents can respond to what they view as bad speech with better speech. In the free expression of ideas, people can reach their own conclusions and better viewpoints can prevail. Instead, in cases like the one involving Räsänen, critics are seeking to silence those with opposing viewpoints.  It is a new orthodoxy imposed on dissenting views — the same state-supported intolerance that once led to the censuring of gay activists and advocates for LGBT rights.

One can certainly disagree with Räsänen. I can certainly see how many would find her tweets offensive. However, we all must maintain a common covenant of faith in the right of everyone to be able to express their political and religious views without threat of punishment.

England arrested another Pastor for preaching the same Truth.

Canada arrested another pastor for preaching the same Truth.

England, Canada, Finland – probably more.  Arrested for speaking Truth against Satanism, because homosexualism is certainly satanic.  We must fight against the encroachment of Satan.  We cannot remain silent.

I have heard of this happening in all of the US mainline churches.