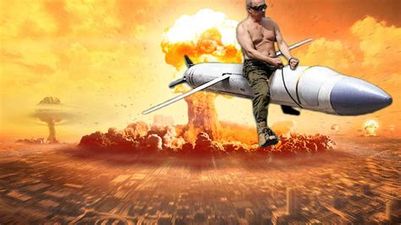 Putin and Russian military commanders believe that Biden, NATO and the NATO operation to literally surround Russia with NATO member States intend to destroy Russia and install a puppet manager, much like the NWO installed Biden as President of the United States.  Putin correctly understands that all sovereign States must take the knee to the One World Government.

That is our reality, whether one believes it or not.

So Putin et al are going to go full on freedom fighter and when Putin, essentially a monarch in Russia, states that he will not hesitate to use nuclear weapons to stop his enemies, you better believe he means exactly that.  And he has given fair warning, yet still people want to imagine that he is bluffing.  He is not bluffing.

People seem unable to read and understand what is plainly printed in my articles, in triplicate, hyperlinked, bold typed, and italicized.  Putin will deploy nuclear weapons and surrender his life and the lives of many, many Russians before he let’s any other entity conquer his country.  He will do it.   W I L L  D O  I T.

Do you understand that?

When Putin and Dugan and other Russian men of note use the word “existential”, you might want to LOOK IT UP in a dictionary.

I read the book On War, written by Clausewitz many years ago and it is a brilliant work.  His wife actually had it published after he died back in the late 1800’s.  Here is an interesting bit:

Military Minds II: – The backbone of surprise is fusing speed with secrecy. – If the leader is filled with high ambition and if he pursues his aims with audacity and strength of will, he will reach them in spite of all obstacles. – If we have made appropriate preparations, taking into account all possible misfortunes, so that we shall not be lost immediately if they occur, we must boldly advance into the shadows of uncertainty. – The Statesman who, knowing his instrument to be ready, and seeing War inevitable, hesitates to strike first is guilty of a crime against his country.

Putin is a consummate Statesman who knows his instrument is ready.  He tested two hypersonic nuclear-capable missiles already in the last week.  He already said he would strike first if it comes to that.  Look up “Existential”.

“War is the continuation of politics by other means,” explained The Commander, quoting Carl von Clausewitz, the famous Prussian general and military theorist. “Von Clausewitz advocated that you continue to pound your enemy, you don’t stop a fight until you negotiate an end to it,” he added. “We tend to pause our military actions during negotiations, but Russia is doing as von Clausewitz advised. Putin is continuing to attack even as talks with Ukraine are taking place,” said The Commander.

Putin does continue to fight, even delaying negotiations, while he positions to negotiate.  If I were him, at the negotiation table, I would look at my watch and at the exact moment, would relay to my opponent that I just destroyed some dear and precious monument in Ukraine.  Then, a few minutes later, I would pause the conversation to do it again, teaching my opponent that I am perfectly capable of burning his country to the ground while he argues over Donbass.  That is pressure.  And yes, I would have the events displayed on a big monitor, even the steady fighting of our opposing infantry, playing like a John Wayne movie on Iwo Jima, while we discussed terms of his surrender.

“For political and social as well as for military reasons the preferred way of bringing about victory was the shortest, most direct way, and that meant using all possible force,” wrote Clausewitz. “The truth is that there are goons in this world, and they respect only one thing – strength – that’s it,” explained The Commander. “It is tempting to believe we’ve evolved past that kind of thinking, but it is wrong, we haven’t,” he said.

Putin is in serious danger of becoming trapped in his own weakness – his army does not seem fit to fight, and all Putin has available to him are nuclear weapons.  Which brings me to Sun Tzu, The Art Of War.

Anyone know?  What’s going on on the ground in Moscow?  How much traffic headed out of town from Moscow or St. Pete?

Oh and one last question. Does President Putin believe in Yeshua as Messiah?

David, you’ll have to ask Mr. Putin. I suspect he does believe. He did go to some monastery on an island somewhere in Russia to pray before some military action a few years ago. I saw a photo of the island. It was just large enough for the monastery. But you ask an interesting question. I’m intrigued.

I wish I could speak directly with President Putin. From what I have researched so far about him, he has allowed the building of a historic number of Russian Orthodox churches at a high rate of speed during his tenure as President. I understand his mother was a believer. And it is also my understanding that a foundational belief within the Russian Orthodox church is they are the guardian of the old way. There are many qualifiers I’m sure that would also apply.

So who will strike first? NWO (LWO) or President Putin?

Interesting. My vote is that NWO (LWO) will strike first. A false flag. And then that event generates a massive response by Putin. I don’t see him bowing down to the new order or the new monetary system. But Putin is similar to Trump, in that, Putin is participating within the 4th Industrial Revolution like Trump is, both believe in the injections and both locked down their countries and both fight for their peoples. Interesting days we live in brother. I could really use a good teaching on Gog and Magog right now. Something tells me in my ignorant heart that if Putin would go all out nuclear that he would have very good reason to do so. And does that mean would he target Israel and its corrupt leadership?

Possibly. What the west is doing to Russia will force Russia into a corner, from which they will strike out of desperation.

You have put together a good article. Thought provoking.

When I was a kid about 14 years old I bought and read a book on Peter the Great. It was 300 or 400 pages and I read all of it. I finished the book impressed with the Russian people. They have endured so much pain and sorrow, its hard to believe. But they are consistent, and kind of unique among nations. Not particularly holy, but lots of heart.

That would be a very useful read.

Welcome To The War wpDiscuz
10
0
Would love your thoughts, please comment.x
()
x
| Reply