Incidentally, a few days ago when Russia rolled into Ukraine, my website was attacked (unsuccessfully) by someone.  The attackers were identified as Russian and Chinese, but anyone who knows how can make a hack attempt appear to come from anywhere and anyone.

The image below will show you. 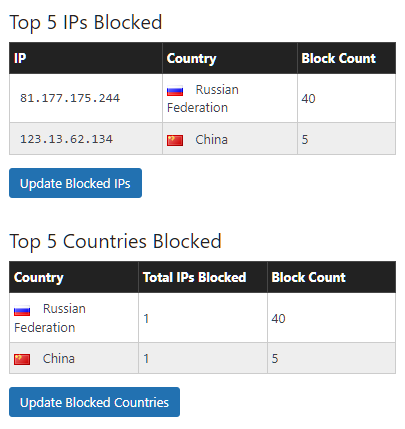 What is unusual is that Russia has me blocked and so does China.  I don’t know why Russia would, so I do find this odd.  Additionally, these are the only two attacks the entire day.  Some days I receive over one hundred from locations all over the world.

But those could all come from one individual living on the eastern seaboard of the United States or even in the piney woods of east Texas.

In this case,  I suspect the cyber folks in Washington, D.C. did this specifically to generate some hate toward Russia and China from this writer.  Its truly sad when there is a budding war with a major competitor taking place, and a former “secret agent” and officer of the United States Army first suspects his own government.

On the other hand, if these are genuinely from Russia and China, we have proof that they are operating together and that China is involved at the cyber level in Putin’s opening moves.  China does indeed want Taiwan and Taiwan would be a huge prize for China, because China would gain control of FOXCON, the largest computer chip manufacturer on earth and a 500 billion dollar company.  Getting FOXCON would allow China to totally disrupt all US manufacturing that requires computer chips.  Farmers would not be able to repair tractors.  Car parts could not be repaired.  Gas pumps, toll booths, airplanes, military hardware and much more- a horror show.

Let the Euros handle Ukraine.  We have to defend Taiwan.  That is critical to our survival, because if we lose Taiwan, China will gain on us much faster and we will lose allies as China makes deals with them to receive processors (computer chips).

In fact, this entire Ukraine gambit by Russia might only be a ruse to get the USA to commit to Europe, allowing China a much greater possibility of success against Taiwan.  Every day that Putin expands on his assault, the odds of China striking Taiwan go up.

What To Look For

Russia rolling S-400 platforms into NW Ukraine and the coast, probably Crimea.  China positioning warships around the South China Sea and positioning armor (tanks, personnel carriers) to be ready for loading onto transport ships.  China will probably have to sail around to the back of Taiwan to have much beachhead, which will be a dead giveaway of an attack.

Just in the last few days, China initiated a “training exercise” that is positioning lots of navy assets on the back side of Taiwan, out some distance in the South China Sea. In the current training exercise, we can see that China wants to block the gaps between land masses and deny US naval vessels access to defend Taiwan.

Maybe they are loaded and prepared to strike from their “training positions”?
3
Please leave a feedback on thisx

Taiwan is a much greater prize than Ukraine, for sure.  If ChiRussia gains Taiwan, they will greatly damage whomever they deny processors to, and they will demand and get whatever price they set.

That is the nature of the pirates aboard the ship “China”.  Of course, Putin is a bandit, too.  As is the filth in office in Washington, DC.

Jerry Richter
Maybe they are loaded and prepared to strike from their "training positions"?" Read more »

Jerry, on your “test” email, my message would not go through. Now it’s working.

Jerry Richter
Maybe they are loaded and prepared to strike from their "training positions"?" Read more »

Fog is spreading across the world, and it is getting more dense by the day. Deception days.

If it really was R & C that were doing the blocks, could it be that they put a block on all foreign IP’s for a certain time frame? ?🤔

I’m always blocked in those two countries. The people can’t ass the same Internet that we have access to. Putin walled them off as a defensive measure, same as China. The attacks against my site are “brute force” and “complex” attacks whereby they attempt to break into the admin area using different techniques. But Kate, I have had so many attacks on this site, and in the thousands. I watch them and my defenses make it supremely unlikely they will gain entry. But my former site was completely erased after Trump was elected. I had three sites on that server and “they” wiped ALL of them out plus deleted the backups I had on that server. It was so thorough that the hosting company I was on threatened ME, because they were afraid they might lose the entire farm. But five years ago I was totally warlike and political, and destroyed the democrats every single day. Even Trumps team reviewed that site, twice. I was sending Trumps website a lot of traffic and that got… Read more »

Kate
Maybe they are loaded and prepared to strike from their "training positions"?" Read more »

I will be surprised if China makes a move after reading how Russia absolutely crushed its own economy by attacking Ukraine. Europe is very angry towards Russia. It was a bad mistake by Putin. But you know what? He had the hooks in his jaws because he said he would take military action if Ukraine went with NATO. When Ukraine did not back down, Putin had to do something or look weak. Hooks in his jaws, for sure. Now if only Megiddo would be discovered in Ukraine, we would be even closer to going home.

Agree. Putin said he doesn’t want military on Russia’s borders. He knows this administration is using bioweapons. He’s asking for territory that belongs to Russia and these territories want to be apart of Russia. Obama wanted Putin to attack to have a reason to money launder and stop the exportation of grain and minerals they want in Ukraine. I believe and there’s suspicion that Obama sabotaged the Russian pipeline to shut down Europe with no hope. Now a diplomat for plants and animals that I’m sure they will destroy. Injecting wildlife with vax toxic bait to blocking the sun and co2 to destroy life. I believe the elites have underground caves where co2 will be directed underground to them. The US military is damaged by shots and grounded unvaccinated ones. The agenda is to lose our country anyway the Marxists can make it happen and there will be raids on conservatives and forced injections and quarantines like Australia. They have 5G control over so many who are at least double and boosted with self assembling… Read more »

Awesome comment, Polly. You have done your homework well. I wonder if your boyfriend studies Torah? I’m going to guess “no”. Do you? Clearly you have a love of the Truth, which is a marker for the Righteous. See if your boyfriend will listen to this: https://www.jerrywdavis.com/podcast-i-will-send-a-powerful-delusion/ or if he will read this: https://www.jerrywdavis.com/what-god-teaches/i-will-send-a-powerful-delusion/

Polly, if he refuses, find yourself a man who follows Yahusha, otherwise your relationship will be one of contention and animosity as he grows closer to anti-Christ and you grow closer to the Truth. Having a weak believer for a mate is a catastrophe. You’re going to need a lion for what’s headed our way.