Oh my goodness, do I have treat for you this morning.  Guess who owns the software company that switched all those republican votes into votes for democrats?  Come on, give it a guess…

And not just any old rich, unethical, anti-christ democrat either.  The democrat who owns the software company that switched Trump votes into Biden votes lives and works in Washington, DC.  Yeah, Washington, DC.

Senator Dianne Feinstein and her husband Richard C. Blum are controlling owners of Avid Technologies, the manufacturer of a software product called “Dominion”, the secret vote-switching software used in the treasonous attempt to fraudulently win the Office of President by automatically switching votes from republicans to democrats.

Note in the images below that Blum structured their ownership in 10 percent increments, and spread the shares among six companies that he and Feinstein own.  Combined, they own 60 percent of Avid, making them the largest shareholders and the controllers of the company.

They are responsible for the software, and it was not a ‘glitch”.  It is a well designed and intelligently executed vote-switching technology that makes the calculations and switches votes from the assigned target to the  preferred candidate in real time.

Its about power, you see.  Power, and whatever helps these pirates achieve it.  This is an execution-level crime, people.  A public hanging offense.  A go-to-war-now event.

Nancy Pelosi is also close to Avid Technologies/Dominion because her former Chief of Staff left Nancy Pelosi and went to work for Feinsteins’  Avid/Dominion as a lobbyist in Washington.  He works to get Dominion more voting machine opportunities and more access into Congress.

Mentioned during a Fox News interview by host Maria Bartiromo were Nadeam Elshami, House Speaker Nancy Pelosi’s former chief of staff who last year became a lobbyist for Dominion, and Richard Blum, California Sen. Dianne Feinstein’s husband, who she said is a significant shareholder in the company.

“They have invested in it for their own reasons and are using it to commit this fraud to steal votes. I think they’ve even stolen them from other Democrats in their own party who should be outraged about this also,” Powell said.

The attorney also suggested that Dominion had a hand in tilting the primaries in Joe Biden’s favor. “Bernie Sanders might very well have been the democratic candidate but they’ve stolen against whoever they wanted to steal it from,” Powell said.

The screenshot comes from the government SEC page at https://www.sec.gov/cgi-bin/own-disp?action=getissuer&CIK=0000896841 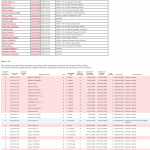 Also discussed on television, via FOX News, Sydney Powell (General Flynn’s attorney) in an explosive (to the left) interview.  This woman is a superstar.  Listen to her.

Keeping this brief, because you can look up information on Feinstein and China easily, Feinstein and Her husband are very close to Chinese leadership.

After the U.S. normalized relations with China in 1972, Feinstein was one of the first mayors to set up sister-city agreements with Chinese communities. She linked San Francisco, where she was mayor at the time, to Shanghai, whose mayor then happened to be Jiang Zemin, later president of China.

They became fast friends – Zemin spent a Thanksgiving at Feinstein’s house in San Francisco and even danced with her in the evening – and the relationship between Zemin and her investor husband, Richard Blum, grew significantly.

I will bet money that this election fraud was co-managed by some experimental Chinese artificial intelligence.  Maybe not, but AI could potentially be highly impactful in determining when, where and how many fake votes to dump into the election-day tabulation system.

Even my dog knows what happened in the election at this point.  Fantastic criminality that goes to the very top of the Democratic Party.  Treason, fraud on a national scale, graft, bribery – it is the largest known criminal conspiracy in American history.  Biden will never take office, and some “important” democrats are going to be removed from their posts, maybe for prison time.

The unfortunate people at the bottom, who have been lied to and deceived for so many years, are going to be encouraged to burn down cities.  Thank China’s influence for this.  China wants to destabilize America, as does Soros and many other influencers.  Massive domestic disruption will begin and endure for a significant time.

Prepare for food, fuel and electrical disruptions.  Natural gas and probably water will likely be more stable, mostly because the facilities are fewer and thus easier to defend, but being fewer also makes them more critical choke points.  Know your neighbors and make friends.  Reassure them that you are a solid person.  If food becomes scarce enough due to attacks on delivery processes or manufacturing or even poisoning crops in the field, even stable folks might become desperate to feed their children.  And certainly there are nut jobs who just barely function in civil society who will leap at the opportunity to steal and to rob.

If you follow Yahusha, you know to pray and have a living relationship with Him.  What is happening in the USA is a direct result of sin.  America is a beastly place, with few true believers.  The separation that Yahuah promised me is at hand.  It is good for those who follow Yahusha in the Way, but devastating for the billions world-wide who do not.  When you are afraid, and you will deal with fear, pray.  Trust Yahuah.  If you are taken by the enemy and cannot defend yourself, if you face execution, then face it in the knowledge that you are going immediately to peace in the love of Yahuah.  We are told not to fear these things by Yahusha Himself.  “Fear not“, He says, and with reason.  But He (Yahusha is aka “Jesus”) has first-hand experience with Heaven, we don’t, so its a struggle for us.  He knows this.

This will be exciting, and many stupid decisions will be made by our government, so pray for President Trump.  He will be proven the winner and the democrats will go insane because they just had the delicious taste of victory snatched right out of their diet.  Do not provoke them 🙂