Rev 6:8  And I saw, and behold, a pale green horse, and the name of the one sitting on it was Death; and Hades followed after him. And authority was given to them to kill over the fourth of the earth with sword, and with famine, and with death, and by the wild beasts of the earth.

We’re not talking about dogs and bears and alligators and lions here, folks.

Authority comes only from Yahuah, and in this case He gave it to the 4th Horseman.  Are the Righteous still on earth?  I do not know, but its possible.  Hades contains both the good and the bad, in two different and far distant locations within hades.  He is going to separate the Righteous from the unrighteous.  We are going to leave here by some mechanism, but I just do not believe Yahuah will let His people be shredded by animals. Particularly bio-engineered man/wolf hybrids designed to be hyper entities.

These “wild beasts of the earth” in Revelation 6:8 are special.  These are tribulation ear, 4th Horseman-caliber beasts.  Showtime.  Climax of the movie.  Not your grandfathers scary monster, but Satan’s.  As people take to the forests to hide from the satanic minions of Klause Schwab and to protect their children, these creatures will be waiting.  And don’t be surprised if that are prepeared in huge caverns beneath the earth even now, and also that 5g might repel them from the cities.  That 5g comment is a wild guess.  But maybe.

An 8-9 foot tall creature that looks similar to this: 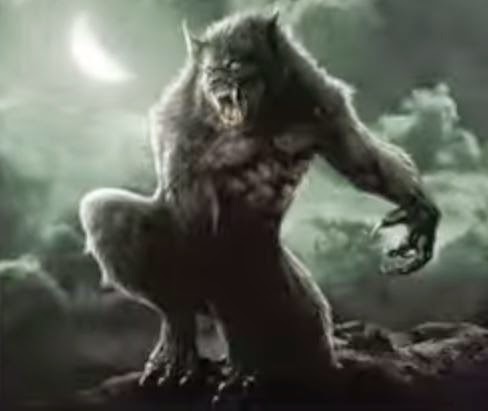 I took all of these with a grain of salt forever, until a few days ago when I listened to three hours of eye-witness first-person “happened to me” accounts, and all of their stories were very mush the same –  8-9 feet tall, legs like the hind legs a giant dog, arms like a human but with very long fore-arms, five fingers (no thumb) on each hand, maneuverable ears, reflective eye color, stench of rotting flesh, razor sharp teeth and lots of them, intelligent behavior.  All of these details reported over and over and over by people in widely different locations.

So I’m a believer in these things.  Plus, anyone with a functioning mind is aware that the secret government in the USA has been working on super-soldiers for decades.  The chimeras are nothing new, but these specific ones are true monsters.

The beast has hands like you and me.  Long, sharp and thick fingernails.  More than one row of very white teeth, with very sharp points.  It stinks, badly.  It runs very fast.  It has hind legs like a dog, the knees are forward of the foot, not above the foot/ankle like people.  They apparently operate on the front half of their feet, up on the balls of their feet when not laying down.

Skin shows under the hair on the skin.  The hair is kind of patchy, and there is much less hair on the chest and stomach areas.  Pointed ears, often about eight inches long, erect, rooted in top of the head more than the side.  The ears can lay flat back.  Eye color varies from amber, red, black.  Maybe other colors.

Rather intelligent.  Eats bones as well as the non-bone material in its prey. Obvious human genetics.  A lab-made hybrid.

People who have had encounters with these things are universal in their declaration that they were terror-filled.  Often they comment that these things seem conscious of themselves and what is happening around them.

One was shot in the chest at about 15 feet with a high-brass 12 gauge shotgun slug.  Pectoral muscle was hanging down from its chest, and still this beast chased down the buggy the two men were driving away in at around 45 mph.  It caught the buggy and began to slow it down.  Bear in mind that this beast was just shot in the chest at point blank with a 12 gauge shotgun slug and there is no degradation of performance.

A Special Forces team showed up a day or two later, called there by the local Sheriffs office.   Grab a sandwich.  The “video” is audio only, and the audio us next.  The video is on youtube, but again, its still audio only.

Even though I believe with all my heart in Messiah Yeshua and our Lord Most High Yahuah our creator and Father in Heaven, just because I believe, I in no way consider myself righteous or to be righteous in His eyes. In fact, any time righteousness is spoken in the Word I immediately fear the Lord and humble myself. As time gets closer to His return, I sense the need to continually increase humility, to the point where anything that comes out of my mouth I sense His judgement. Wisdom calls.

We are human and prone to be selfish, David. You will find perfection to be a difficult pursuit. Yahuah did tell Abraham to “Walk before me and be perfect.” So there is the call to perfection. One day last week I started crying like a baby because I could not keep that command. I did not feel in any way condemned or judged by our Father, but I wept from the sadness of letting Him down. Odd, because other times I can let Him down and never even blink. Humility is a big pill to swallow. It hurts, and heals. We are called to love, to forgive and to let go of every attachment which interferes with our relationship with Him as primary. I do not see myself married again, because the freedom I have to live without having to make another adult “happy” is such a blessing. Take your time, brother. Walk in peace.