JerryWDavis.com is not the “bad news channel”, but there is a lot of tribulation-era action under way and when I publish this ugly mess it is purely  because my readers need to know that the wickedness of the lost is escalating to dangerous levels.  And now this… 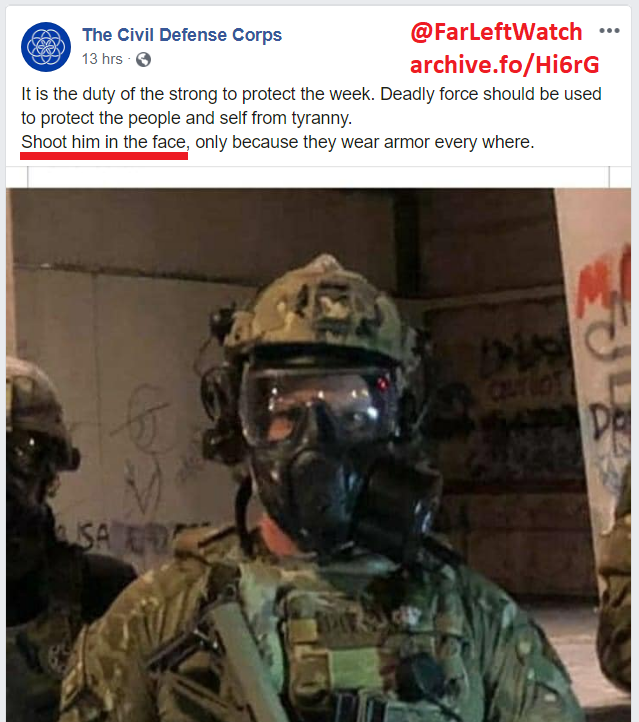 Here is the meat of the information…

“Over the weekend there were multiple shootings at “mostly peaceful” demonstrations across the US. In Louisville, KY, three members of the Black Nationalist militia group, NFAC, were injured due to a negligent discharge from one of their own members. In Aurora, CO, a “mostly peaceful” demonstrator who was blocking traffic opened fire on motorists who did not stop and wait to be assaulted by the mob. In Austin, TX, an armed Black Lives Matter protester was killed after allegedly pointing his gun at a motorist, who then shot the protester in self defense. These tragic shootings follow an ongoing campaign of agitation, targeted political violence, and organized insurgency. And while DNC leaders like Congressman Nadler claim this violence is “just a myth“, it is unquestionably escalating in frequency, intensity, and organization.

The latest example of this escalation comes from the Columbia, SC based far-left militia group, Civil Defense Corps. According to their website, they are actively recruiting “former infantry” and will be using these armed “Reserve Units” to “investigate hate crimes and threats against minorities as well as the LGBTQ+ community”. The group claims to be a 501(c)3 and even has a somewhat formal application process. In addition to general employment information and professional references, there are four questions for the applicant. The first two are “Are you comfortable around firearms?” and “What is your opinion on MAGA?”.

Unfortunately, this group does not stop at just recruiting armed anti-Trump extremists, they also actively use their social media accounts to coordinate offline harm. In a recent Facebook post (archive), they encouraged their followers to shoot Federal agents “in the face”.

The entire article with links and more images are at this location: https://farleftwatch.com/antifa-militia-group-encourages-facebook-followers-to-shoot-federal-agents-in-the-face/

So what is to be learned from this information?

Two things leap to mind when I read this.

For sure, depending on the money, he will hire some actual talent.  When the government allows an individual to HIRE PAID MERCENARIES in broad daylight, in writing, where anyone on earth can see what he is doing, you know that the government is perceived as pathetic, weak and utterly flaccid.  The gutless response of local and state governments is disgusting.  The local governments of these towns allowing these riots are guilty of treason.  They are guilty.  GUILTY.  They are complicit in the destruction of these cities.

And they (these leftist governors and mayors)  act with complete impunity, knowing that Trump will do nothing.  But what about the “people” of these cities and states?  What about them?  They say nothing, do nothing, stand for nothing.  Silent as mice.  Still. Quiet.  Not a peep from them.  Even in Texas.  Even in Texas.  Austin, TX.  The capitol.  The home of Greg Abbott, governor.  And what does the State of Texas do about these rioters carrying firearms?  Nothing.  Citizens defend themselves rightfully with deadly force because Abbott allows Antifa troops to form up.

They are shooting at us, Gregg.  I understand that you have 24 x 7 armed security, but we the people are out here on our own, Gregg.  We expect you to stop these formations, Gregg.

Scared.  Damned gutless state and local governments who will not restore order, and who encourage destruction, facilitating the spread of more and worse.  Yahuah is right.  It is His judgement on America.  There is none who is righteous, no, not one.

So as one who follows Yahusha, one who is called to peace, but one who is commanded by the God you claim to believe to arm yourself, what do you do?

Certainly you defend yourself and others.  Absolutely and with deadly force when necessary.  No rational person looks forward to killing another person, but we might have to do it and we have Yahusha’s blessing because He orders us to be armed.

Example: just this morning at 2:09 AM my spouse woke me up to tell me that she just heard the side gate close or open.  I trusted her judgement on this, grabbed Black Betty (my heavy duty tactical black 12 gauge pump shotgun with red dot and front-mounted light) and went on patrol.

After scooting my apparently fully domesticated fawn out of the doorway and calling my dog, I went outside.  Rango, my guard dog, was on the stairs, peering at me around the corner and trembling at the mere thought of Black Betty making that loud “BOOM” sound.

Abandoning any hope of having my dog sniff out a prowler in the back yard, and seeing that Bambina (fawn) was running around in the grass all excited, I started my investigation.

Long story short – there was someone inside the gate last night, checking out my back door.  It was my 14 yr old son looking for his asthma inhaler and he didn’t want to wake us up, so he tried the back door.  He was spending the night at another kids house, and came home to get it.

It was awkward gaining control of my weapon.  I was very sleepy, and had been asleep when she woke me.  I had to decide which weapon, then access that weapon and load it in the dark.  I had to find the zipper of the bag I keep my shotgun shells in, in the dark.  I did not know for certain which shells I was loading – #8’s low brass or 00 buckshot highbrass.  For this operation, I preferred #8 lowbrass.  Ended up with 00-8-8-8-00 in that order.

My spouse just told me that some kid was recorded by the Ring video camera (potentially good, ultimately bad) network in our neighborhood going around checking doors in the night, last night (not near us).  And a few weeks ago some crew blew through from San Antonio stealing a car, bicycles and other things.  Three car loads of perps, and this is a very nice new subdivision in a previously small town.

Having said all that, I confess that there is a side to me that wants to take the war to the enemy.  I do not like waiting on them to grow stronger, which seems to be the battle plan of our state (Gregg Abbott) and local “protectors”.  Are allowing the infection to spread so they can wade in and declare martial law?  Trump is terrified of taking the war to them because it will result in piles of dead fools for the globalist enemy media to pound into the heads of voters before the election.

If you are like me and want to pursue the enemy to ground, I feel you.  I mean, there they are, hundreds of them burning down police stations and looting stores.  A PIECE OF CAKE.  Taking them down would be sooooo easy, and dear Father in Heaven I want to do it so badly.  But He does not give me liberty to do that.  We must wait.  He is Just and America is in trouble.